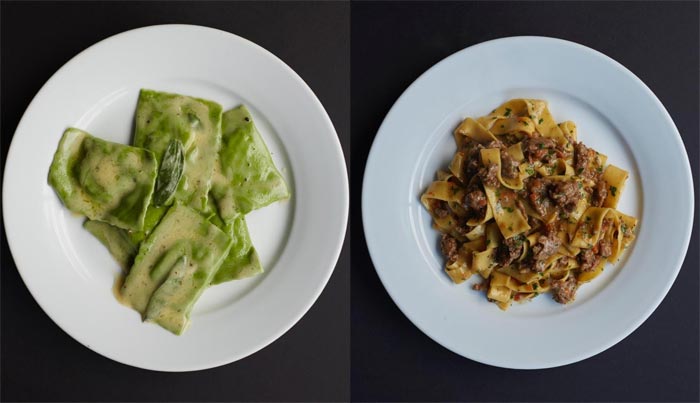 Way back in the mists of time, the first restaurant story Hot Dinners ever broke was the opening of Trullo, just off Highbury Corner. Well, it's taken a little time, but we've eventually got round to bringing you another exclusive story from Tim Siadatan and Jordan Frieda, the duo behind Trullo. The pair are on the verge of opening their second restaurant, this time in Borough Market.

Padella is, they say, based on Trullo's "greatest hits". They'll be serving up eight pasta dishes at around £7- £10.50 a dish. All the pasta handmade in-house, or rather in-window as you'll be able to see it being made from the street. And if you're a fan of the restaurant's heavenly beef shin pappardelle, you'll be happy to hear that's on the menu too, along with:

The two floor restaurant takes over the old Degustibus spot and will have room for 50 with counter dining on both floors - you'll be finding us on the stools by the open kitchen.

Drinks will be similarly edited at Padella - there'll be a few wines served on tap from barrel, Prosecco by the glass and the three classic Italian drinks - Negroni, Americano and Sbagliato. Just don't ask for a latte or cappucino as they'll just be making Espresso, which can also be topped up with Grappa or Sambuca.

Padella will open at 6 Southwark Street London SE1 1TQ. They open on 24 March 2016 for a soft launch with 50% off food until 27 March - walk-ins only (launching fully on 29 March). They'll be open every day, with opening hours expected to be midday-10.30pm. It's a no bookings restaurant. Keep up with their news on Twitter @Padella_Pasta