[SIGPLUS_EXCEPTION_SOURCE] Image source is expected to be a full URL or a path relative to the image base folder specified in the back-end but /blog/2014/trine/gallery/ is neither a URL nor a relative path to an existing file or folder.
0
Shares 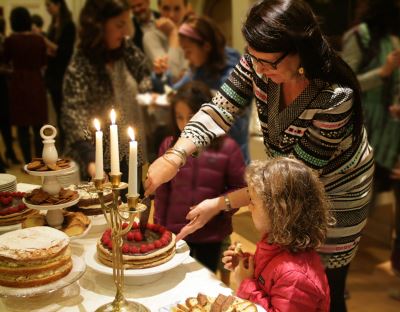 We are only now recovering from what can only be described as a cake coma following the launch party for Trine Hahnemann’s new book, Scandinavian Baking this week. The event was held at the beautiful Danish Church in Regents Park, where the impressive Danish cake table (as seen on Great British Bake Off) was the main focus of the evening.

The huge selection of delicious cakes and biscuits were all baked by Trine herself, who enthusiastically encouraged everyone to tuck in, commenting that she’d been "baking non-stop since Sunday!"

The divine Napoleon Hats – small Danish cookies with marzipan centres, dipped in dark chocolate – were a solid favourite, and the mouth-wateringly moist rye cakes were light, airy and totally moreish.

Trine said; “I’ve wanted to do a baking book ever since I was a little girl. I started baking at eight and never stopped. As soon as I hit a hard time in my life, I bake a cake. When my family walk in to my house and smell a cake – they’re like ‘what the hell is going on?’”

The author gave special thanks to her husband and family for devouring her bakes at home (who can blame them), and said; “All the recipes in the book were tasted and tested at least three times… Some were tested ten times, so there was a lot of cake! At the end of a day of baking my husband and I would divide up the cakes, then he would drive around to all our friends and family and drop them off.”

Scandinavian Baking is published by Quadrille. Buy it here on Amazon.