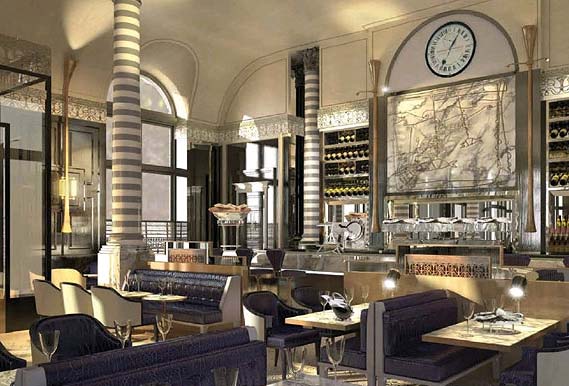 Top Italian chef Massimo Riccioli is heading for London to open a branch of his renowned restaurant La Rosetta - which has been serving up top-class seafood to the Romans since it first opened in 1966.

Riccoli will launch a fish and seafood restaurant in new five-star hotel The Corinthia, which is opening up on Whitehall Place in early 2011. He was last in town back in June cooking the welcome meal for chefs at Identita 2010.

In addition to Riccioli's restaurant, the 294-room Corinthian hotel will also feature an all-day dining 'new wave British restaurant' (whatever that means) which will be situated in the restored Victorian ballroom.

Both Riccioli's restaurant and the hotel bar will be designed by none other than David Collins, who's responsible for such London delights at Bob Bob Ricard and the bar at Claridges. Certainly a quick glance at the publicity shots (see right) do look rather nice.