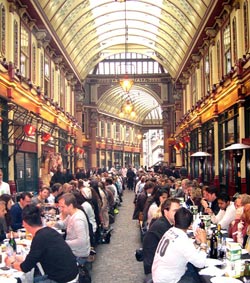 Another landmark event at this year's London Restaurant Festival was The Big Roast, held this Sunday at Leadenhall Market.  Nine of the city's top chefs got together to cook Sunday lunch for hundreds of people lucky enough to get a ticket.  With all of those involved personally overseeing all the cooking, it was a good opportunity to see some of London's leading chefs in action. Hot Dinners went along to see whether their roasties were any good.

First up, we caught up with Mark Hix, cooking roast partridge with bread sauce on the first shift of the day.  The chef/restaurateur has had a busy few weeks with the opening of his new Soho restaurant and bar, Hix, so we asked him how it's gone: "Good actually, it’s probably the easiest restaurant opening I’ve done,' he told us. 'I’ve got a good team with Kevin, the head chef,  who was the head chef at Scott's and Caprice before that, and we have a good front of house team with some great cocktail boys." We mentioned that many of the first reviews from Hix seemed to feature both critics and chefs having a fairly dim recollection of the entire evening. He admitted his guests had been "plied with cocktails beforehand - but that was their choice!"

Meanwhile, Richard Corrigan was busy pouring wine for the chefs who had finished the first shift and told us, "I brought my pig farmers from my organic farm in Dundrum, Co Tipperary and they are taking care of things.  It’s a combined combination of brilliance and is a special occasion for the London Restaurant Festival only."  Corrigan has been one of the biggest supporters of the festival, not only taking part in the Big Roast, but also the Gourmet Odyssey and Starter for Ten -  "It’s been brilliant and also to have been on the team that kicked the critics’ arses – I didn’t have to do much with that but with Jeremy Lee and Rowley Leigh sitting beside you – that’s enough....Generally I think that anything that brings London hospitality into the international limelight is good for business, and it allows you to write something good about us!"

Elsewhere, Jeremy Lee from the Blueprint Cafe was cooking "rump of wild roe deer – from our dear friend Glenn Wetherell in Dumfries who’s looked after our game for years and years."  We asked him if he's tried anything else on offer - "Absolutely, everyone’s on cracking form.  Herbert’s lamb is particularly good, Henry’s beef is absolutely delicious – real vintage stuff there – there's some marvellous roasted pig by Mr Corrigan, some delicious quail, it’s all very good – not a bum note so far." He was keen to do the event again next year - "Yes, It’s absolutely terrific – lots to learn with a massive learning curve, but it's great fun and the spirit is good."

Herbert Berger, from 1 Lombard Street, was "cooking lamb – I’m doing rack of lamb which is cooked pink, a slow cooked shoulder of lamb, and the belly  – a very special lamb from Denby in Wales."  He too was loving the occasion - "Yes, all my friends are here and we’re having a bit of a laugh. For example Fergus and I were cooking a big dinner last night, a charity event, Action Against Hunger.  It was Heston Blumenthal, Fergus, Angela Hartnett and me cooking a dinner and here we are again today doing another one!".

Meanwhile Henry Harris, from Racine was serving "roast beef with gravy and I’ve got my daughter here to help me. I’ve got some lovely organic beef from Somerset, all rosy and red and I’ve only had two portions come back saying "can you recook it please" – but if people want their meat cooked that way I'm not going to tell them different. It’s not normally something I’d serve at my restaurant, there’d be no Yorkshire pudding or horseradish and I’d probably do it with bordelaise rather than gravy."  At this point - two of the serving staff arrived to ask for a bit of beef for themselves, at which he gave them a huge heap to take away into a corner - "If you look after the people who are looking after you, life suddenly becomes so much easier!" 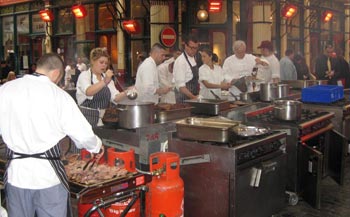 Harris was a particular fan of the Festival Menus - "We’ve had a lot of bookings from the festival so far. I’ve done two menus, one for £15 one at £25, which is quite representative of Racine. What’s quite nice is that people come in for the festival menu, and then they look at the rest of the menu and choose something else - people always sit down and look at what else is on offer.  We certainly had a few new customers."

Hot Dinners were hugely impressed with the event and based on this year's showing will definitely be taking a crowd of friends down to Leadenhall next year.  The atmosphere was humming, the food was divine and the chefs looked like they were having a great time.

Just before we left, we asked the chefs where they'd go for their ideal Sunday lunch.


The restaurant festival continues till tomorrow, October 13, so there's still time to try out a Festival Menu.
0
Shares