Written by Catherine Hanly
Created: 14 May 2013 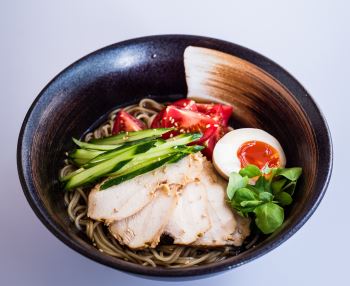 In a valiant effort to bring on the British summer, Soho ramen joint Tonkotsu are launching a new, lighter ramen dish this week.

Hiyashi Ramen which will be on from 12pm this Thursday costs £9 and features cold noodles (made by Tonkotsu), soy-based cool stock topped with marinated chicken, tomatoes, cucumber, pea shoots and their legendary soy marinated egg. A vegetarian version will be available.

"It's really fresh and perfect for a lighter option to Tonkotsu and if the sun ever comes out!," Tonkotsu co-founder Emma told Hot Dinners today.

The new ramen isn't the only thing they're working on. "We're opening a Tonkotsu in east London in July," said Emma. "The exact location will remain a secret until nearer the time, but it's in Hackney. It'll be a simple menu serving ramen, gyoza, kara age and Japanese octopus pancakes."

Tonkotsu is at 63 Dean Street, London W1D. Find out more about Tonkotsu.