Tommi's returns to the Princess of Wales with a triple burger 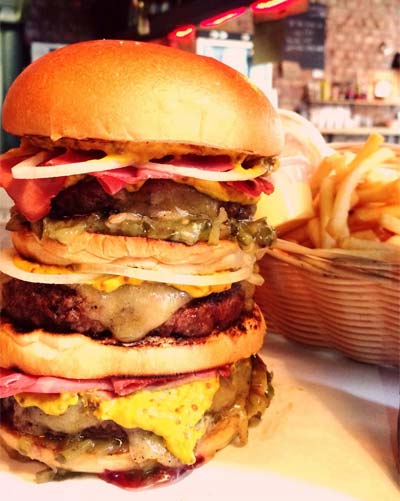 Their new London burger joint is due to open very,very soon but, in the meantime, Tommi's are gearing up for their next visit to The Princess of Wales in Primrose Hill which will feature a mammoth burger.

The Ultimate Burger will be a much bigger version of the Tommi's New Yorker -  it has three beef patties totalling 21oz (one and a quarter pounds) and is topped with horseradish mustard, Monterey jack cheese, sweet pickles and onions.

While that'll take even the most hardened burger fanatic a while to devour, they'll also be giving them away free (plus a cocktail) to anyone who can finish one off in under five minutes - plus some vouchers to use at their Burger Joints. Alternatively - they'll have their normal range on offer too if you reckon that burger looks just a wee bit too much for you.