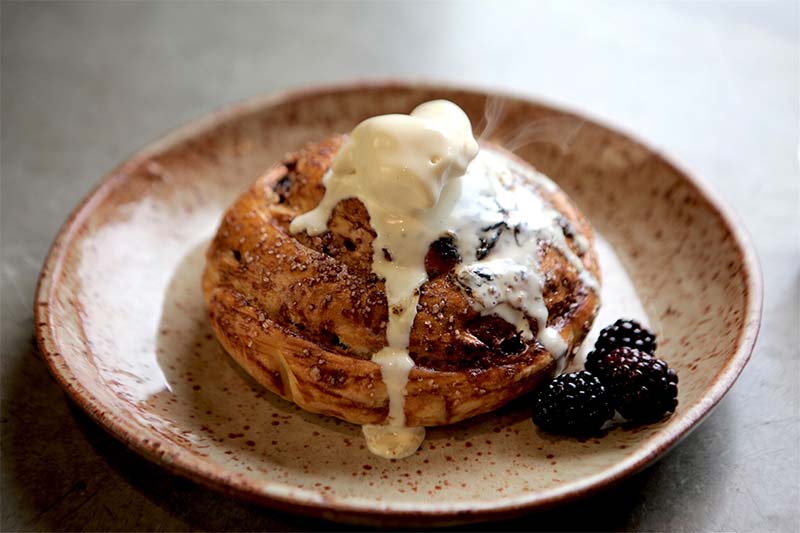 You’d think if your Michelin-starred restaurant was closed for a renovation, you might be able to afford yourself some time off. Well, not if you’re Tom Sellers, who’s instead decided to make the most of it with a new, three-week Robin Hood-themed ‘immersive’ pop-up.

He’ll be doing a ‘banquet-style’ menu riffing off the Nottingham fairytale - that's the part of the world Tom comes from himself. It’ll be focused around meat, and heavy on traditional foods and cooking methods- think beef cheeks in hay, smoked haddock in milk, bone marrow with eel, and braised and hot smoked lamb leg. There’ll also be lardy cake - a rich, traditional spiced bread - served with salted blackberries and cultured ice cream for dessert (pictured above), plus drink pairings provided by the head sommelier of Story. It'll be £65 for four courses.

Head down to the lofty Bermondsey venue on 18 April, and you’ll also be catered for by none other than Jason Atherton, who’ll be one of the many ‘Merry Men’ making a guest appearance at the pop-up, happening every Wednesday.

There’ll be an adjoining bar with woodland-themed cocktails from Matt Whiley, and a snack menu dubbed ‘Pig Tales’. A seating at Merry Men, will cost you £65 and include one drink.

Restaurant Story closes for renovations on 31 March and reopens on 7 May.

How to book: Visit the event homepage from 19 February 2018