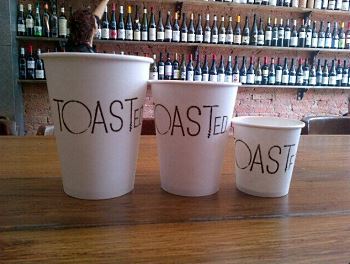 The lucky denizens of East Dulwich have a spanking new place to eat, drink (and take wine home from afterwards). Toasted (the ed refers to East Dulwich) opened a few days ago on Lordship Lane.

Formerly the Green & Blue wine bar, it's been launched by chef Michael Hazlewood and Manager Alex Thorp.Hazlewood worked at Attica in Melbourne, Australia, and more recently at both Soif and The Green Man & French Horn in London while Thorp has previously worked at Fifteen and Vinoteca. The two dining rooms seat 80 in total and there's also a 10-seat bar.

Toasted will have a daily changing, ingredients-focused menu. The site has a wood-fired oven which they'll be using to bake bread, as well as cooking fish and meat. Open all day - the menu ranges from breakfast and weekend brunch through to full on dinners. Dishes range from salad of fine green beans with almonds (£4) to sea bass with clams, quinoa and fennel (£17) to short rib with pickled lettuce and horseradish.

As you might expect from a place with wine connections, there's a large wine list - but perhaps a more interesting feature of the dining room are the four 300-litre stainless steel tanks, filled with natural wine direct from the winemakers – a white from the Loire Valley, a rosé from Provence, a red from the Southern Rhone, and a Tempanrillo from Spain. You can have the wines in the restaurant (from just £2.55 for a glass) or take it home with you in reusable bottles.

Toasted is at 38 Lordship Lane, East Dulwich, London SE22 8HJ and is open for coffee from 8am; breakfast 8.30am-Noon; lunch Noon-3pm and dinner 6.30pm-10pm. The wine shop is open from 8am-Midnight. Reservations can be made on 020-693 9250 or for more information go to www.toastdulwich.co.uk or follow them on Twitter @toastdulwich