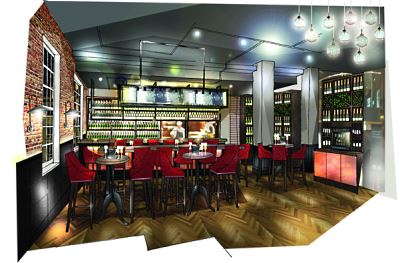 An interesting team with experience at some of the country's top restaurants has behind the opening of Tirage on Bishopsgate next month. Their concept is to offer one of the largest selections of Champagne and sparkling wines by the glass in London alongside an menu of tasting plates, which sounds like a fine plan to us.

There'll be a 120-strong list of sparkling wine and Champagne list mixing household names with lesser-known grower and rare varieties. Every day approximately 15-18 different labels will be available by the glass. And - in time for Christmas - that number is expect to be 30.

Providing competition to other late night dining spots, the kitchen here will be open for business from 7.30am for breakfast right through to dinner until 12.30am. Head Chef Alasdair Fraser (formerly of The Abingdon, in Kensington) has come up with a menu that ranges from Cornish scallop ceviche with baba ganoush to pan-fried foie gras with caramelised pear, chilli popcorn, kaffir lime and blini.

The 4,201 sq foot site, will seat 154 covers across two floors, including two private rooms (one sponsored by Perrier Jouët) and three semi-private areas. Stylish high tables, leather stools and banquettes are surrounded by wooden floors, brick walls and antique lighting from the high ceilings to create sophisticated yet informal surroundings.