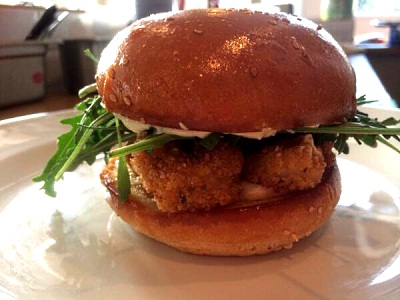 We're not afraid to admit that even we get surprised by the odd new opening around town. So when we saw that Giles Coren was singing the praises of a new restaurant round his way, we did a little digging.

The Spoke opened up in January in upper Archway on Holloway Road where Angie's used to be. It's run by the people who opened Bread and Bean a few years back - "Archway's first decent coffee shop" according to Coren. They're Valbona Sadiku and Jose Granja - she worked as manager at The Heavenly Social for 14 years and he's an Aerospace engineer. "We both had a dream of opening our own place for a long time," explains Valbona.

"We had a passion for coffee. We lived in Archway for 10 years, we love the area but we noticed there was nowhere nice to drink a cup of coffee. We decided to look for a space for a coffee shop and opened Bread and Bean. Two years after, the time was right to look for something different. We saw an old pub that was closed for a long time and we just decided to open The Spoke.

They're open all day, kicking off with breakfast which ranges from full English (with Merguez sausages) for £8.20 to eggs with salmon, tomato, & chilli avocado mix on bread (£7.80). Lunch is a range of sandwiches and Mac and Cheese and in the evenings they offer a range of burgers and cocktails. Most recently they've added what looks to be a great prawn Po' Boy with rocket and Japenese mayo (£7.80).

The Spoke is at 710 Holloway Road, London N19 3NH. For more information follow them on Twitter @thespoke710