The Scotch Egg Challenge 2014 returns to the Ship 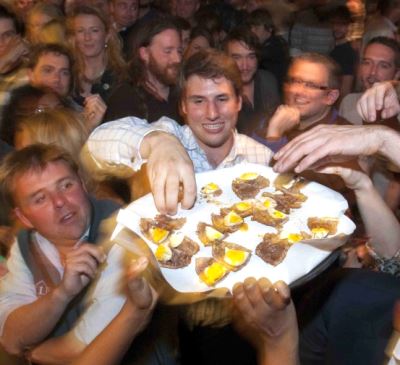 Updated 28/8/14 with the full run-down of the contestants and eggs.

Forget Michelin stars, one of the most sought after accolades in the restaurant business is to come top the heap at the Scotch Egg Challenge. Held every year at The Ship in Wandsworth, it sees chefs from across the land competing to see who can come up with the best egg/meat (even sometimes fish) combination.

Last year's event was won by The British Larder with a smoked venison Scotch egg which triumphed over other entries from the likes of Duck & Waffle, Barrafina, Kitchen Table, Draper's Arms and more.

Now we love a good Scotch egg and happily devoured as many as we could at last year's event. We love them so much that we (i.e. Hot Dinners editor Catherine Hanly) are actually going to be part of the judging team this year, alongside The Guardian’s Bob Granleese, Katie Glass (Sunday Times), Oliver Peyton, Eric Lanlard and Ed Smith (@rocketandsquash). Joe Warwick will compere.

The full run-down of what we (and anyone attending) will be trying this year is:

The event is free to attend, but we highly recommend getting there early to grab a good table.

The Scotch Egg Challenge 2014 is at The Ship, 41 Jew's Row, Wandsworth, London SW18 1TB on 16 September. The action kicks off at 7.30pm but get there earlier to soak up the atmosphere. For more information, follow them @ShipWandsworth.