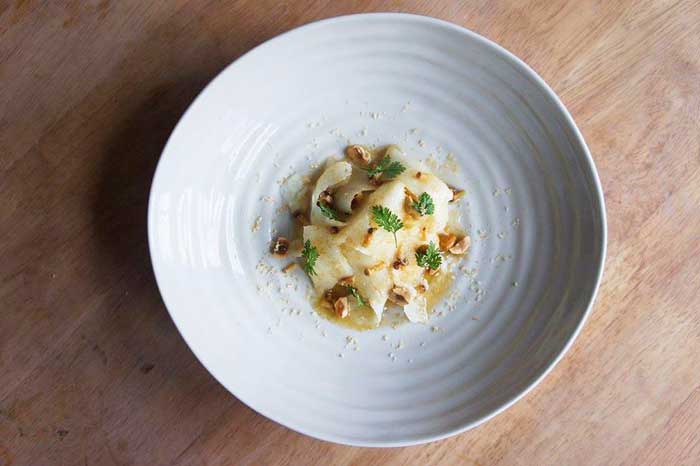 We're suckers for a good pop-up and the latest, interesting venture launching in London is taking over the Canvas Cafe just off Brick Lane for its opening night.

The Potlatch has several interesting folk involved. It's the brainchild of Nick Gilkinson - a manager with D&D London and part of the team that's just opened The German Gymnasium in King’s Cross. In the kitchen is former Clove Club chef, Jonathan Williams and his four course menu for the pop-up's first event sounds amazing. It kicks off with various snacks to share - duck liver parfait with rhubarb and brioche and pork crackling with anchovies and sunflower seed. Then:

"I am really excited about The Potlatch," says Nick. "It is a chance for me to create my own restaurant for one night a month and whether it's a sip of an amazing wine, taking a bite out of a perfectly cooked dish or even the music playlist creating just the right atmosphere.

The Potlatch takes over The Canvas Cafe at The Canvas Cafe, 42 Hanbury Street, E1 5JL on Tuesday 8 March 2016. Tickets available for £60 per head and include a welcome cocktail and wine. Keep up with their news on Twitter @the_potlatch