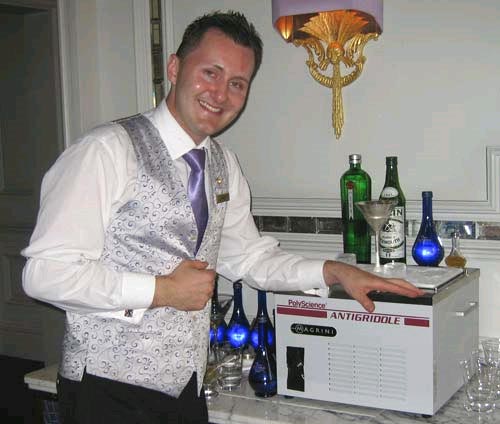 A drink billed as "the world's coldest martini" easily grabbed Hot Dinners' attention, so last night we jumped at the chance to test out the Langham's new groundbreaking cocktail.

The Langham's barman, Alex Kratena, has been dabbling with science in an effort to create a new type of drink for the hotel's bar, utilising his new "anti-griddle". It's much like its name suggests - a large plate that freezes rather than cooks, getting so cold that the condensation from the room turns to ice on its top. It's something that chefs have often experimented with in kitchens and an impressive piece of kit that Hot Dinners were warned not to touch lest we remain affixed to it.  This is, of course, like a red rag to a bull and we couldn't leave without at least brushing the very, very, very cold surface.  Curiosity sated and fingers intact, we learned more about the creation of the drink.

Kratena is using the anti-griddle to achieve a freezing cold drink without the use of ice and without actually freezing the gin (Tanqueray No. TEN, who are sponsoring the new drink).  To achieve this, he's created a special two part goblet specifically for the martini. Silver-plated to ensure it conducts the cold faster, it takes around 10 minutes for the bowl containing the martini to chill to -25 degrees (so he'll always have a few on the go). The bowl is then placed on its pedestal so that the whole thing looks like a real silver martini glass and  retainins the cold for much longer than a normal martini.  As you lift the cup from its pedestal to drink, it genuiniely looks quite cool (no pun intended) and we can attest to a startlingly cold martini with an instant alcohol hit - we can recommend.

In all, we are highly impressed with a drink that combines science, bar-theatre and alcohol and with Kratena's enthusiasm at its creation.  It launches at the Langham from 1st August and will cost £15.

Read more about the Langham.