The Good Egg looks to head to Stoke Newington via crowdfunding 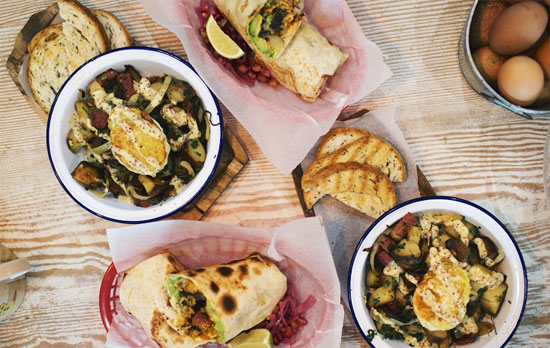 From street stall to pop up to a restaurant of his own: Joel Braham, the chef behind the popular Good Egg is launching a crowd funding appeal to help open his very first permanent site. Working with him is former Ottolenghi pastry chef Oded Mizrachi, and executive chef Theo Lewis, from Pizza East.

He's planning an all day brunch cafe inspired by modern Californian delis like Wise Sons, which serves up 21st century Jewish comfort food in San Francisco's Mission district, with echoes from the contemporary food scene in Tel Aviv. If you've been to the Good Egg pop ups in London Bridge or Islington or the recent food stalls at Kerb and Netil Market, you'll know some of their trademark dishes. They include a spiky Shakshuka to a huge plate of short rib pastrami piled on top of sweet potato fries and covered in melted, bubbling cheese finished in style with a blowtorch.

Joel's restaurant will be right on Stoke Newington's thriving Church Street an area which already boasts a round Jewish tradition: he's already found the site and is now working with Hackney Council to sign off on all the paperwork.

With training in kitchens like Arbutus and Ottolenghi, the new venture will give him a chance to expand the menu beyond a few brunch dishes...so think a mix of deli sandwiches like a classic Reuben, but also Middle Eastern dishes with an American twist, like fried aubergine in pita with eggs and zhoug, a whole roasted cauliflower with tahini, and honey challah French toast. The place will stay open into the evening, offering larger plates like steak and eggs, Syrian meatballs and sweet potato latkes with smaller mezze dishes to share.

All this plus a list of craft beers, wine and cocktails - which, says Joel, will take you from brunch through to dinner.

The Good Egg team are aiming to raise £180,000 for 24% equity in the project, with investors promised a series of rewards ranging from discounts to tasting events - and even free food for life! Shareholders, Joel says, can invest as much or as little as they like, starting from just £25.

And beyond Stoke Newington?

The plan is to open three places over the next 5 years. So if you have a longing for bagels and lox, with a breakfast burrito and a slice of warm chocolate babka on the side, you might want to get in on the crowdfunding action.

You can find the link to the crowdcube funding site on their website or on Crowdcube.