The Future of Meat brunch at Hawksmoor Guildhall 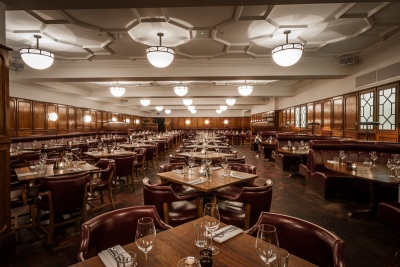 Our friends at Toast events have come up with the kind of talk we like - one that concludes with a feast of Hawksmoor goodies.

The Future of Meat is the chosen subject and they've brought together three experts on the topic: Hawksmoor executive chef Richard Turner, The Ginger Pig owner Tim Wilson, and Philip Lymbery, CEO of charity Compassion in World Farming and author of Farmageddon: The True Cost of Cheap Meat to chew it over.

Join them at Hawksmoor Guildhall for Bloody Marys to start and - following the debate - a sharing-style brunch using produce from The Ginger Pig. The team at Hawksmoor's brief: to show how meat can be used sparingly to create something feast-worthy. That means dishes such as pig cheek scrapple with grits, short-rib bubble and squeak, homemade baked beans, fried eggs, black pudding, hash browns and piles of toast with plenty of butter. Sounds good doesn't it?

To book your place (tickets cost £40 which includes brunch and pre-talk cocktails and have just gone on sale) go to http://eatdrinktoast.com