[SIGPLUS_EXCEPTION_SOURCE] Image source is expected to be a full URL or a path relative to the image base folder specified in the back-end but /blog/2013/meatopia/gallery is neither a URL nor a relative path to an existing file or folder.
0
Shares

The first London Meatopia kicks things off in grand style 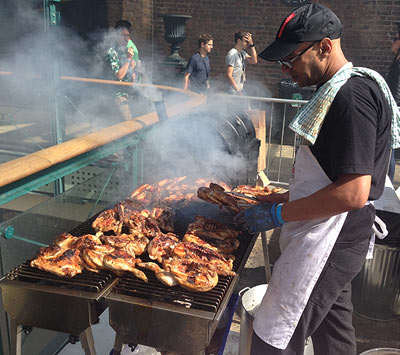 We'd been looking forward to Meatopia on Hot Dinners for quite a while, and this weekend we finally got to head down there and check it out for ourselves. Suffice to say, it was a great event all round - packing in 3,500 meat-loving folk. Even the nearby EDL march, which caused the exhibitors no end of grief in getting more meat to the event later in the day, couldn't put the dampeners on what was once of the best food festivals we've seen in town for a while.

We got down there pretty early - and if you head down next year we would certainly recommend you do the same as some of the queues got pretty epic by the end (We think that Koya and the astonishingly long queue for Manchester's Almost Famous took the prize here). That said, even later on there was always somewhere that you could get food relatively quickly - particularly at the Shake Shack stand which seemed to be populated by energizer bunnies.

And the food itself was well worth it - with lots of one-off dishes created for the event. We took it as a matter of professional pride that we managed to get through as much of them as we possibly could. There wasn't a duff turn in the food we tried, but we should give special mention to a few particularly winning dishes.

Duck and Waffle's Dan Doherty's BBQ pig's head slider with truffle slaw was the first thing we had when we arrived and remained the top dish throughout the event for us, despite strong competition from a couple of Americans. We loved the smoked chicken and crimson grits from The Hot and Hot Fish club from Alabama, and the Paella de Cerdo from New York's Tertulia was blessed with both a short(ish) queue and wonderfully tender pork. But the UK crowd was VERY strong. Neil Rankin from Smokehouse teamed up with Dallas' Smoke for an excellent pulled BBQ whole hog taco, while Chop Shop's meatballs were so good apparently one customer had come back fifteen in all.

The music and entertainment was great - we particularly loved the singalong by the piano in the pub - and everyone we bumped into appeared to be having a fine old time.

We're already looking forward to next year's, but in the meantime take a look through the gallery below to see what we ate and more.