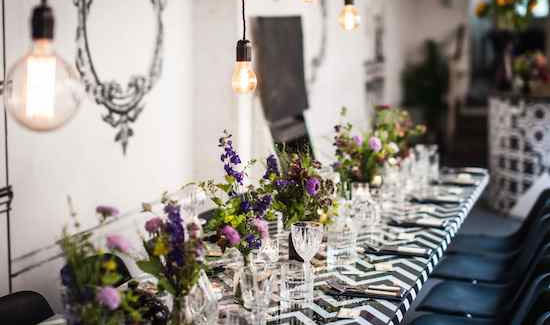 The Dead Dolls Club and Dolls House in Hoxton are already big hits and now they're expanding to Islington, taking over the space that used to be House of Wolf.

What you need to know about Dolls House, Islington

The original Dolls House was supposed to be a pop-up, but became a huge success. So 18 months later and it's not only still going but heading to Islington.

Taking over the space left by House of Wolf, it's much bigger than Hoxton. If you've been there in any of its former guises, you'll know that the place is a bit of a warren, extending across three floors of the Victorian building. So the ground floor is the the Parlour, the first floor is the Drawing Room (drinking) which also features an Espresso Martini Bar and the Library (dining) and the second floor is the Ballroom (the members' area). As with the original, the entire place is decked out by Adam Towner and Katy Gray Rosewarne in intricate marker-pen detail. Apparently we can expect brushed-gold table tops and bar and soft furnishings featuring dogtooth and herringbone patterns and a splash of turquoise. As Katy Gray Rosewarne says "I love Quentin Blake, trompe l'oeil wallpapers, illustrative picture frames and all of that lovely ornate antique furniture you get in National Trust stately homes – and since we can’t afford that, I just draw it instead!"

You can also become a member, at a pretty affordable rate. Apparently, all you'll need is to fill out an online application and take "a well-chosen gift when you turn up for the first time in the form of a bottle of posh, top shelf liquor from their approved gift list". You'll get a welcome drink of whatever you've brought, a tour, never be charged entry for events (and take guests at a reduced rate). And after 11.30pm you'll have access to a special door that will give you access to the member's bar, open until 4.30am. You can also hire out the ballroom for private dinners up until 11.30pm.

For the food, they've brought in Daryl Wilson, previously been at the The Salt House in St Johns Wood, Ampersand and the Poachers Pocket Supper Club. He'll be serving classic dishes created from locally sourced ingredients including 45-day aged Dexter Sirloin and duck fat chips for example. He'll also have a lighter bar menu and a roast dinner with all the trimmings on Sundays.

And there will, of course, be cocktails (as well as those espresso martinis). They'll include Amaretto, Whisky or Pisco Sour, Negronis, Old Fashioneds. All for you to drink alongside the "generally laid back and funky choice of music including live jazz and resident DJs Bex, Alex (Bear Grooves) and Jack in the ground floor Parlour".