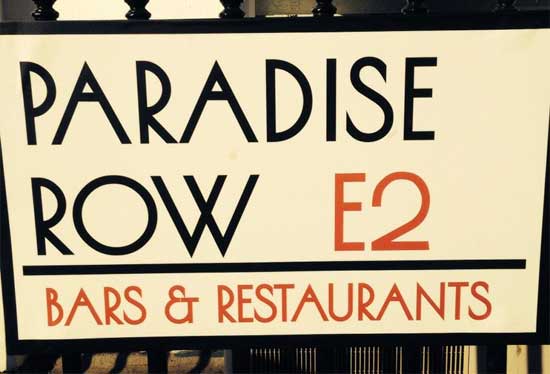 The Dairy chef Robin Gill is a busy chap. Not content with being a driving force behind the much-lauded The Manor which opened in November and with The Delicatessen beside The Dairy (which Hot Dinners have been to and think it's a must-visit), he's about to open another new restaurant in Bethnal Green.

"It's an amazing space in East London in Bethnal Green under a railway arch," Gill told Hot Dinners. 254 Paradise can be found on the same stretch as Mission and Mother Kelly's.

In the kitchen will be Chef Simon Woodrow who joined the Dairy in 2013 and who, as the Dairy says cooks with "a more traditional and British approach" and who was previously with Arbutus. He's being joined by their pastry chef from The Manor, Kira Ghidoni (who has come up with amazing dishes like this and this while there). She'll be creating desserts based on seasonal produce and British heritage.

The look of the place is going to be key. "We are building an open kitchen with an option to sit up on the pass for up to 8 guests." It's the next obvious step forward from their dessert counter at the Manor (familiar if you've been to The Palomar too) and you'll be able to sit at the counter right in the action, watching and interacting with the team creating the dishes and cocktails. The main restaurant area will also have a mezzanine section surrounded by house cured salumi, ferments and wines. As for those wines, "Damiano from Tutto wines will be doing the wine list and expect tasting menu with drinks pairing."

On the menu, we can expect:

Sounds like this part of Bethnal Green is going to be a must-visit come summer. "I have always loved the East End," says an excited Robin, adding that he was "delighted that the landlord chose us over a huge list of competitors to take the site. "We have already touched base with the other businesses on Paradise Row and as a community we have big plans for the Row including a music festival."

Paradise Garage will open officially Tuesday 21 July 2015 at 254 Paradise Row, London E2 9LE. They'll be running a soft launch offer from Friday 17 July to Sunday July with 25% off the total bill (food AND drink). For more, follow them on Twitter @ParadiseRow254