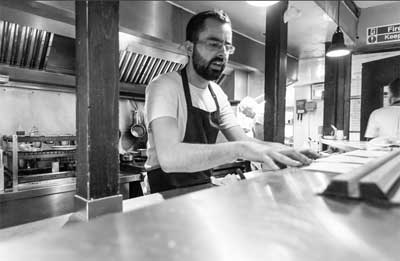 Looks like the BackBench at Koya now has competition as one of the hardest seats to get in town. From January there's going to be serious interest in the four seats going on sale every month for the late night Bloodshot supperclub at The Dairy in Clapham.

The inspiration for the new monthly event came from a conversation The Dairy's Robin Gill had this week with fellow chef Nuno Mendes of The Chiltern Firehouse. "We agreed that for a booming capital city our late night dinning scene is pretty shabby! I couldn't stop thinking about it and as a result have created something quite exciting and aimed at industry folk."

What he's come up with is a supperclub taking place on the last Saturday of every month where you get a five cooked by The Dairy's team and a guest chef. The evening kicks off at 1am, "and I expect it to go on quite late."

"I wanted to create an evening for the hard working folk in London restaurants that traditionally close on Sunday/Monday," Robin explained to Hot Dinners. "I know from working in the industry over the years that after a hard week post service on Saturday everyone is on a high and wants to go out but usually end up in crap bars/ clubs hitting it hard.... There is almost nowhere to go and eat well.

Despite having only launched it over the weekend, the Bloodshot Supperclub already has a seriously impressive line-up. To date the list (which may be subject to change) looks like this:

"There are no rules to the cooking," says Robin. "The chefs can cook what they like with quite a healthy budget. It is a non-profitable set up, it's all about cooks cooking and eating and sharing ideas."

Each supperclub will have just 36 seats on offer - six tables of six at £60 a head all in. But just four of those will be available to the general public. Places will be sold on a first come first served basis with seats released on the first of each month. Right now you can try your luck by contacting @robinwg4 on Twitter. But eventually they'll be available via The Dairy's website which will have a new events page to book through. The first Bloodshot Supperclub will take place on Saturday 31 January 2015.