[SIGPLUS_EXCEPTION_SOURCE] Image source is expected to be a full URL or a path relative to the image base folder specified in the back-end but /blog/2014/egg/gallery/ is neither a URL nor a relative path to an existing file or folder.
0
Shares 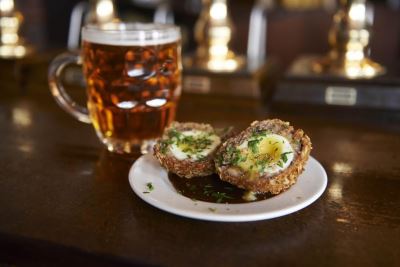 Eating 17 scotch eggs in a single sitting isn't something we ever thought we'd end up doing when we first started Hot Dinners. But last night we were one of the judges at the annual Scotch Egg Challenge which required just such a feat of endurance eating.

Peyton who's used to doing 10 hour long judging days on the GBM breezed through the evening. Thanks to some serious pacing on our part, we were able to walk out of the Ship Wandsworth unaided.

It's now the fourth year of the challenge and competition is pretty fierce, although the rivalry was definitely friendly in the kitchen as teams vied to serve up the UK's best scotched egg.

But, as with all things, there has to be a winner. In third place this year was Yolk London who've apparently been doing amazing egg-related popups around North London. Theirs was a runny-yolked Burford Brown egg, wrapped in haggis & pork shoulder, with mustard, fresh herbs and spices and rolled in panko breadcrumbs. In second place was the Draper's Arms with a black pudding and pork scotch egg.

The undisputed winner - and our personal favourite - was the egg served up by chef Michael Harrison from The Cornwall Project which is currently in residence at The Adam and Eve pub. His hogs pudding Cornish scotch egg (pictured here) had everything we were looking for in terms of flavour, texture and appearance. It's on the menu for £3.95 at the pub on Homerton High Street, so get down there pronto if you want to try it yourself.