The Cheese Bar is opening at Camden Stables Market 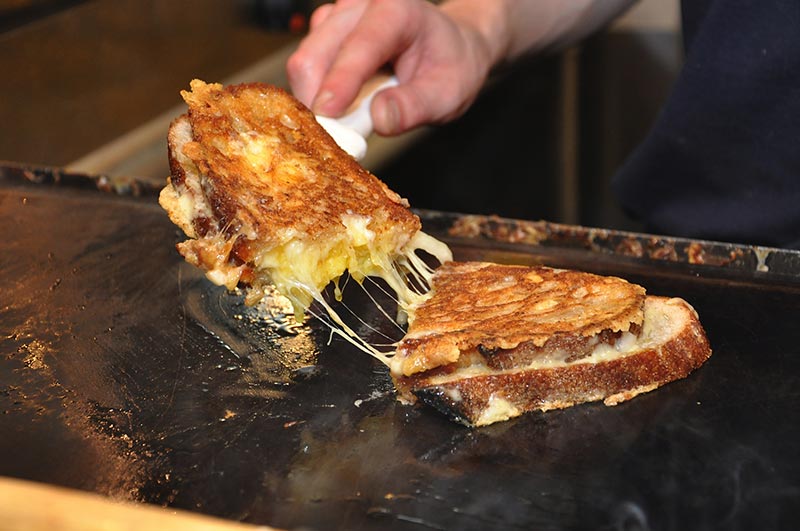 Of the many food trucks going permanent in London that we’ve witnessed lately, we must confess we’re extra glad to find out one of will be The Cheese Bar, purveyor of intensely comforting grilled cheese sandwiches.

After three years selling out of an old ice-cream van, The Cheese Truck will be reborn as The Cheese Bar, dishing out gooey grilled toasties aplenty from a new spot in Camden Stables. That’ll include their classic Cropwell Bishop Stilton with bacon and pear chutney, but there’ll also be a few new ones to try, like a Mexican/fondue creation named the Queso Fundido, or Breakfast Poutine, with bacon gravy, candied pancetta, a fried egg and cheese curds from Gringa Dairy.

There’ll be a pointed focus on using produce from urban cheesemakers, specifically those within the M25, so what you tuck into could be from as local as Peckham like La Latteria and Gringa Dairy. You’ll also be able to peruse a selection of more than 30 of The Cheese Bar’s favourite British cheeses, which we imagine will go down a treat with a glass of craft beer from a similarly huge range.

If you’re still feeling tolerant towards lactose after all that, you’ll be able to get creamy desserts to finish your meal, like the dark chocolate ice cream sundae made with Beenleigh Blue ewes milk cheese.

And before they launch, on 2 March 2017, you'll have a chance to upgrade your shop bought sandwich for one of their grilled cheese creations, with your donated sandwiches going to charities across Camden.

The Cheese Bar will open their hatch on 4 March 2017 in Camden Stables Market. They'll have a short menu up until 23 March when they fully open the bar. Follow The Cheese Truck on Twitter @cheesetruckldn and on Instagram @thecheesetruck.