[SIGPLUS_EXCEPTION_SOURCE] Image source is expected to be a full URL or a path relative to the image base folder specified in the back-end but /blog/2013/scotcheggchallenge/gallery is neither a URL nor a relative path to an existing file or folder.
0
Shares 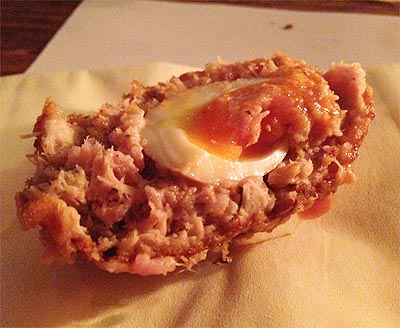 Forget Michelin stars and the World's 50 best, the award that really matters was given out last night as the 2013 Scotch Egg Challenge took place at the Ship in Wandsworth.

The yearly event sees restaurants throughout the country compete on a level playing ground to see who can create the mightiest Scotch egg. Having tasted many of the 23 finalists' efforts last night, beating that talented bunch of chefs was definitely not an easy task.

This year, coming top of an impressive heap of eggs was the British Larder, from Woodbridge in Suffolk. Their winning egg was a smoked venison Scotch egg. We caught up with the Larder's Ross Pike after the trophy presentation to see how he felt about the win.

"I feel great. We've been making decent Scotch eggs for a very long time and this is the first time we've entered this competition," he told us. "So it's worthwhile travelling all this way from little sunny Suffolk."

We asked just how long it had taken to prep the eggs. "To be honest, I made them an hour before I came here. Basically my butcher brought the meat to me about three o clock this afternoon, I made it, got on the train and came here! Today was the first time I literally tasted it! We do a game tasting menu and there's always a Scotch egg of some description on it. Last year (for the competition) we made venison Scotch eggs, we must have made about 300, the first year was smoked shoulder and now this one will go onto the menu.”

Coming second in the 2013 competition was Islington's Draper's Arms with a pulled pig’s head and duck egg Scotch egg while the Canbury Arms in Kingston came third with quail’s egg, wild boar & thyme Scotch egg, with homemade Arran Mustard mayo. The judges also singled out Brompton Cookery for coming so close to the top three.

It was, personally, our first visit to the event and although we've heard people rave about it in years past, only now can we really see why it's a must for the calendar as The Ship does put on a great event. We have, however, come to realise where the point of "too many Scotch eggs" lies, and we may have to forego them for a while. But we'll definitely be back next year to eat our way through them all again.