The Blues Kitchen comes to Shoreditch 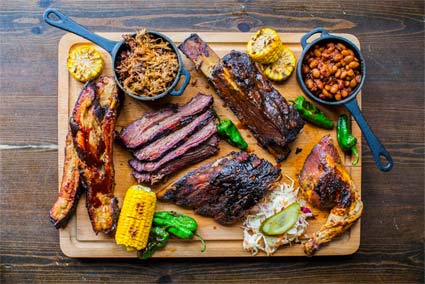 A popular blues and BBQ joint in Camden has gone south to Shoreditch - opening fully this week. It'll be offering Texan BBQ, live music seven nights a week and is also promising "one of the biggest bourbon selections in the UK."

What you need to know about the Blues Kitchen

It's huge. Taking over a converted Victorian warehouse, The Blues Kitchen can pack in 500 punters (150 seated) across two floors in its diner, two bars, dance floor, stage and private events area. So there's "a majestic centrepiece island tiled bar" with a lobster tank set into the middle. And these are no ordinarly tiles as the company is the company involved have previously restored the tiles of Westminster Abbey and the Houses of Parliament. From the bar you will be able to order drinks, or enjoy a more casual counter. They also have big booths and the "high roller booth which can fit 20. There's also a vintage, 1950s silver Airstream caravan, cut in half and which you can hire out. So simply put - it's not small.

The food is Texan BBQ and there's alligator on the menu. Beef and pork are smoked in-house for up to 16 hours and there is also will include smoke roasted chicken or slow smoked beef brisket, all served with fries and slaw. There will be lobsters from that tank we mentioned as well as fried alligator, Hot buffalo wings, texan omelette, jerk chicken burger, seared tuna salad, salt beef Reuben sandwich, pan fried catfish, and porterhouse steak. Desserts include Alabama mess, blueberry & lemon cheesecake and Oreo, chocolate & peanut butter shakes - as well as some bourbon infused hard shakes.

And there is a LOT of bourbon. They have over 100 Kentucky bourbon, corn & wheated, small batch, Tennessee whiskey, single barrel, rye and vintage bottles.  Cocktails will mainly be American whiskey classic - so expect Old Fashioned, Sazerac, Whisky Sour and Mint Julep. And if all that's just not enough, there is Snake Venom, the world’s strongest beer at 67.5%.

And plenty of music of different styles across the week. Monday is acoustic blues, Tuesday live swing and dance, Wednesday Blues Jam, and from Thursday through the weekend there will  be live touring acts and DJs.

And when does it open? It's open now.