The biggest stories on Hot Dinners in 2012 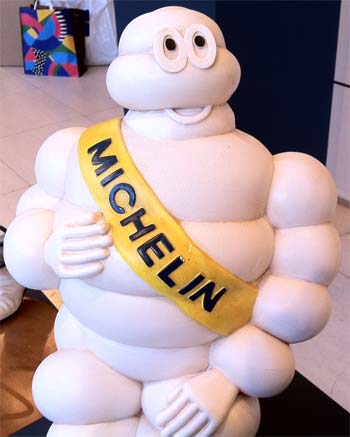 It's been a very busy year indeed for London restaurants. We've seen all manner of restaurants opening but, going by our most-read stories of the year, it's the proliferation of those dirty food establishments that mainly caught your attention. However, despite the move away from high-end dining, there's still room for one tyre-sponsored awards list...

So - here are the biggest stories of 2012 (in descending order):

The relevance of Michelin stars to today's restaurants, as there's a gradual move away from what's traditionally accepted as a Michelin starred restaurant, continues to divide food writers and chefs alike. However, there's no doubt that they're still better known than any other food award worldwide and the latest awards - leaked a few days early - proved to be the biggest story for us this year.
Read the story

Among other things, 2012 was the year of the chicken and this restaurant in Brixton gave us by far the most-read story of a new opening in 2012 (other than our oft-updated Coming Soon page, of course.)
Read the story

Burger and Lobster comes to Soho (and Farringdon)

It was one of the huge hits of late 2011, but it became damned hard to secure a table at peak times. This year, they took over a couple of Bistro du Vin outlets as part of a big expansion plan (with a fourth venue coming to St Paul's soon) so there are plenty of places to get your hands on one of their fine lobster rolls.
Read the story

This was another restaurant specialising in mainly one thing - the much-anticipated Bubbledogs from James Knappett and Sandia Chang in Fitzrovia. The more intimate Kitchen Table restaurant behind the scenes veered away from hot-dogs but still got just as much attention.
Read the story

It wasn't all "dirty food" though, as Yoshihiro Murata's arrival in the City with Chrysan was also well read. The restaurant experience may have divided reviewers, but AA Gill loved it, giving it five stars soon after it opened.
Read the story

It's always a big story for us, as everyone seems to want to know what Heston's up to at Christmas (when not making a Christmas pudding as big as a house). If you fancy making Christmas last a little bit longer, you can snap up one of the chocolate cakes very cheaply indeed now (if you can find one).
Read the story

Tom Adams talks to us about Pitt Cue Co

It was one of the openings of the year and one which really lived up to its promise. In this early interview, Tom told us everything we could expect from the barbecue restaurant and more. We'll be hoping for even bigger things from Pitt Cue Co in 2013.
Read the story

Straying a little further from Soho, where many restaurants opened this year, this place from Jackson Boxer (also behind the much praised Brunswick House Cafe) proved to be a big hit in Dalston.
Read the story

Critics join up to cook for Action Against Hunger

Every year, the tables are turned on some of the UK's top critics at a charity dinner to support Action Against Hunger. This year saw Giles Coren, Jay Rayner, Tracey MacLeod and many more cook up a storm at Hawksmoor Guildhall.
Read the story

And finally, this restaurant at the top of the Heron Tower in the City gives some fantastic views across town but is just as loved for the food (we particularly love the breakfasts). We've been waiting s long time for a high-rise restaurant with food to match the view, and Duck & Waffle delivered on great expectations.
Read the story

For more on 2012 check out the best reviewed restaurants of 2012 and the Hot Dinners Awards.

For all the latest news stories, keep an eye on our Gastroblog or follow our RSS feed.