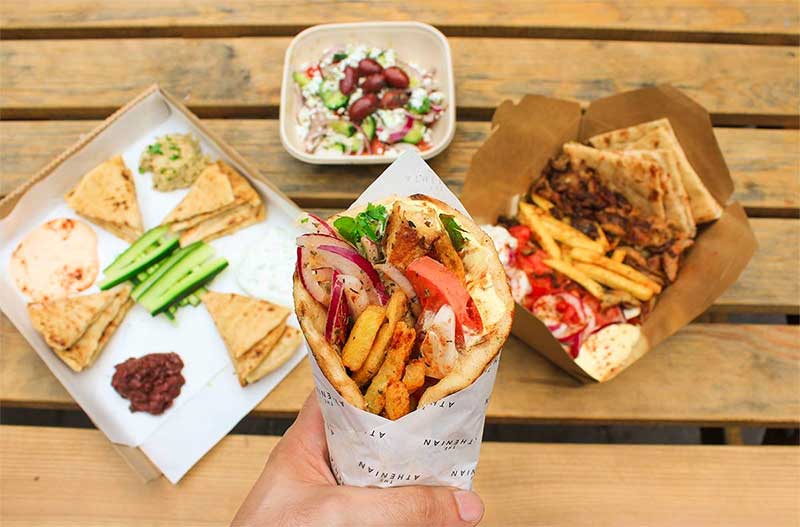 In a nutshell: Souvlaki street food for Belgravia

Summing it all up: Opening right next door to Dominique Ansel is street food spot turned restaurant The Athenian with their offering of souvlaki and mezze

From Shoreditch to South Belgravia is a big leap for any company, but street food folk The Athenian are set to serve up souvlaki in their new home on Elizabeth Street this week.

Duo Efthymios Vasilakis and Neofytos Christodoulou first set up The Athenian back in 2014. Born and raised in Athens and Cyprus and now Londoners, the pair wanted to serve up the popular Greek street food - reckoning that as a healthy but fast snack it would go down a treat.

They've since opened restaurants in White City, Shoreditch and Elephant and Castle but the Belgravia store will see them rubbing shoulders with the likes of Dominique Ansel Bakery and cake baker Peggy Porschen. “The Athenian’s fresh, delicious Greek street food has wide appeal," said Joanna Lea, Retail Director for Grosvenor Britain & Ireland. "We want our London estate to support thriving, enterprising businesses...and new independent brands like The Athenian will help to drive this vision further.”

On the menu you'll find meat or veggie souvlakis as well as salads, meze dishes and a strong Greek wine list. And the chicken gyros fries with Athenian sauce sounds worth a go too.