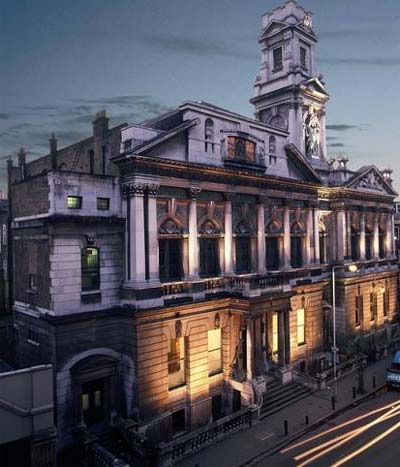 Earlier this year, the Young Turks had huge success at the Ten Bells, which gave chefs Isaac McHale and James Lowe some of their best raves yet. When their run finished, Isaac and the boys from the Clove Club (Daniel Willis & Johnny Smith who manage the front of house) stayed on to run Upstairs at the Ten Bells under their new name of "St Vibes". Now Isaac, Daniel and Johnny are looking forward to carrying that on to a brand new venue - with a chance for everyone to take a part in their success.

The new restaurant will be based in the revamped Shoreditch Town Hall which is currently being renovated by the Town Hall director Nick Giles, with a view to returning it to its former glory. There will be spaces for theatre, comedy clubs and, of course, a restaurant from the St Vibes crew.

Isaac told us "Being part of that regeneration is very exciting. I will be in the kitchen, with Daniel and Johnny on the floor. The food will be exciting, with interesting British ingredients and the three snack, four course format that allows us to do some interesting dishes that people might not order from an a la carte. Vibes will be off the scale."

Daniel continues "We had been working with Andrew Sissons of Hackney council, who had been showing us sites in Hackney. This one came up and we immediately were interested. It's such a beautiful building and the restaurant site itself is going to be amazing. Having a restaurant in The Ten Bells pub as well as Shoreditch Town Hall creates a really nice link between historical buildings in the East End too.

"The site is split into two rooms, the dining room and the bar. In the dining room we'll be serving the four course set menu. The bar is we're going to have a focus on wines, a short cocktail list and a short al a carte menu, so that people can come and just have a drink or have a few small plates."

The restaurant funding is being managed by crowdfunding site Crowdcube. Crowdfunding projects has taken off a big way in recent months and they give everyone a chance, in a way that hadn't been possible before, to become part of a project they believe in at level that suits them.

We caught up with Daniel to find out why they picked this way of kicking off the project. "We chose crowdfunding because it seemed a very innovative and logical way to fund the project. We had a lot of enquiries about investment from a number of people and this just seemed a great way for everyone to be involved, our friends, family and regulars. We chose Crowdcube specifically because our friend and business mentor Jonathan Downey had successfully raised over £1million with them too, so they seemed the logical choice."

And as for the name of the restaurant "we're whittling down the potential names and we think we've got the one but we're keeping it as a surprise."

The unnamed restaurant will open at the Shoreditch Town Hall in October. If you're interested in being part of the St Vibes Shoreditch project, head over to the Crowdcube website, which has all the info you'll need. Upstairs at the Ten Bells will continue to operate above the East London pub.