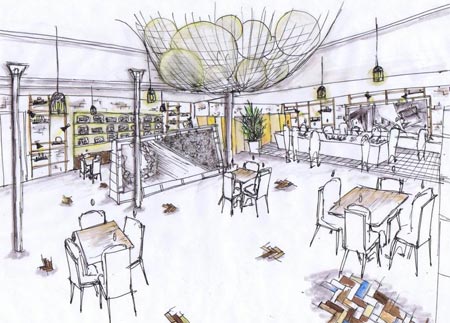 Bermondsey Street has rapidly risen to the top of London's top foodie destinations, with a string of popular, quality restaurants (with... maybe one exception). This week, Tanner & Co will be aiming to match up to its neighbours.

Its menu is very retro-British in style, with crispy spam fritters with piccalilli and ale braised oxtail and mushroom spring rolls making the cut for the opening. There will also be in-house cured and smoked charcuterie and they'll even be selling their own "brined pull-ring cans" for dishes like Pork rillettes. Desserts include iced Neapolitan parfait with praline wafer and blood orange jelly with vanilla ice cream.

Also keeping with the retro British style is a carvery trolley with hanging skewers of meat, which they'll be wheeling around the room. And a breakfast and weekend brunch will both be on offer.

Drinks-wise, there's a short cocktail list, including "Palmer’s Poison" with rhubarb, gin and sherry or "Hickman’s Folly" is a whisky based cocktail served in a chilled martini glass - all named for local legends, both real and literary.

The restaurant itself has both a "gym-inspired" look and is also inspired by local tanneries (all the waiting staff will be in leather aprons). There's a separate private room that can take up to 250 for private events.

To kick things off this week, they'll also be running a different kind of soft launch. If you visit between 23rd to 27th May, you'll only be asked to pay what you think the food is worth - along with some feedback as to why you chose that amount. Note that's food only though - drinks are at normal prices.