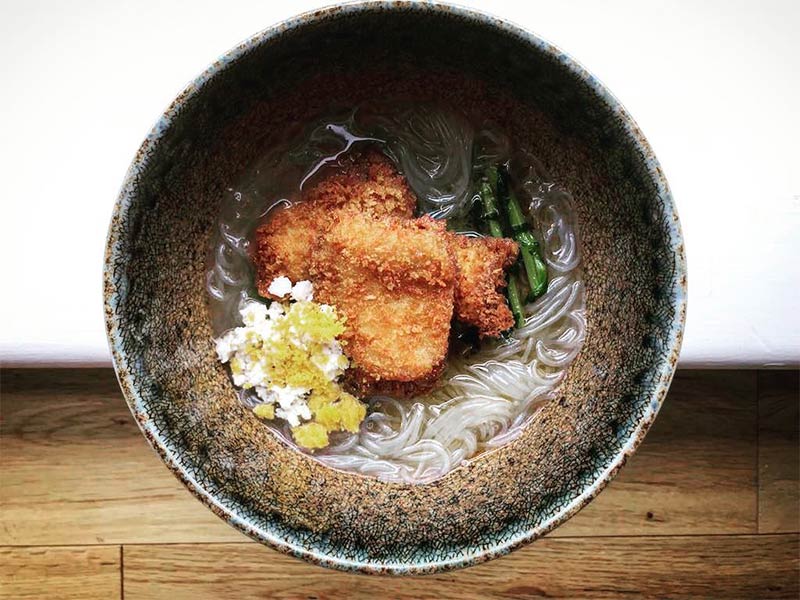 Borough Wine & Beers, who know a thing or two about hosting pop-ups, has announced that its first residency in their Kensal Rise branch will be Zijun Meng and Ana Goncalves of the Portuguese/Chinese-inspired restaurant TĀ TĀ Eatery. It’ll be a three-month residency, and form part of Borough Wine Kensal Rise's Chef Development Series.

Best known for their year in Haggerston’s Curio Cabal, TĀ TĀ Eatery will now be bringing all their intriguing East-meets-West cuisine (that’s in the global sense, not the postcode sense) to its Kensal Rise site.

Some of the weird and wonderful dishes you’ll be able to try during the residency include their Katsu Sandwich - that's two pieces of toast stuffed with Iberico pork neck and Asian slaw, before being deep-fried, and which we can only imagine is as good and greasy as it sounds. There’ll also be their 'playful' take on nigiri and tacos, a handmade ‘Toasted Rice Cream’ with flower blossoms, and additional specials on the menu including large seafood platters and charcuterie plates.

Unlike Borough Wines’ Essex Road residencies, which are ticketed set menu events, the Kensal Rise site will focus instead on providing small, izakaya-style plates priced at around £7 each, so you can mix and match depending on what you fancy.
Naturally, there’ll be a healthy selection of alcoholic treats to accompany your meal, including specially selected craft beers, wine by the glass, carafe or bottle, and cocktails devised by Geyan Surendran.

After meeting under Nuno Mendes and discovering a mutual passion for rice, the husband and wife duo behind TĀ TĀ turned their hand to street food stalls, pop-ups, and their year at Curio Cabal. The residency mark’s their first significant foray to west London, and they’re keen to get stuck in: “it feels like we’re in the middle of a shift back west – especially on this particular road, where there seems to be so much going on,” said Zijun.

When: From 10 May for three months