Sydney's top chefs cook up a storm at The Ledbury 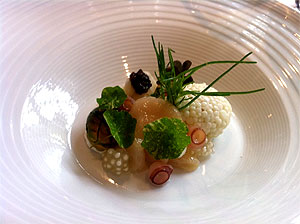 It's great writing about food and restaurants in London right now, but after a special lunch at The Ledbury today, hosted by Tourism South Wales, where Sydney chefs  Mark Best from Marque and Peter Gilmore of Quay showed off their culinary talents - we've decided it must be pretty good being a foodie in Sydney as well.

Mark and Peter were in the kitchen with Ledbury chef Brett Graham creating an astonishing six course one-off lunch with matching Australian wines which Hot Dinners was lucky enough to be invited to. Highlights of the menu for us were Peter Gilmore's sea pearls with tuna, scallop and smoked eel - part of which looked like a scaled down version of something you'd expect to see on the set of Space 1999 and Mark Best's langoustine dusted with Vadouvan spice served with roast cos hearts and burnt fennel.

The accompanying wines were all of the high standard you'd expect from this part of the world - with the 2006 Trentham Estate 'La Famiglia' Nebbiolo notable for its delicate flavour which managed to match the complicated dish of partridge breast with a crumble made up of chestnuts, Australian winter and English summer truffles and black pudding, perfectly.

It was worth waiting for dessert which was Peter Gilmore's White Peach Snow Egg - a version of the dish which caused a storm when Gilmore made it for Australian Masterchef (5 million people out of a population of 21 million watched it - as a result Gilmore now serves up around 120 of the snow eggs a day at Quay 'It's driven my pastry chefs completely insane!'). In Australia this meringue globe, surrounded with a maltose shell and stuffed with ice-cream, sits on a bed of guava granita - here Gilmore used British white peaches instead.

Later in lunch, fellow Aussie chef Bill Granger, who's just moved from Sydney to London, also turned up to work his way round the room. We caught a moment with Mark Best who'd been in London for two weeks and had managed to try a few London restaurants such as Bistrot Bruno Loubet and The Square. 'It's amazing how little people know about the Sydney dining scene,' he told us. 'It's very vibrant, you really must come.'

On the basis of what we ate today - we're going to give a trip down under some serious consideration.
0
Shares