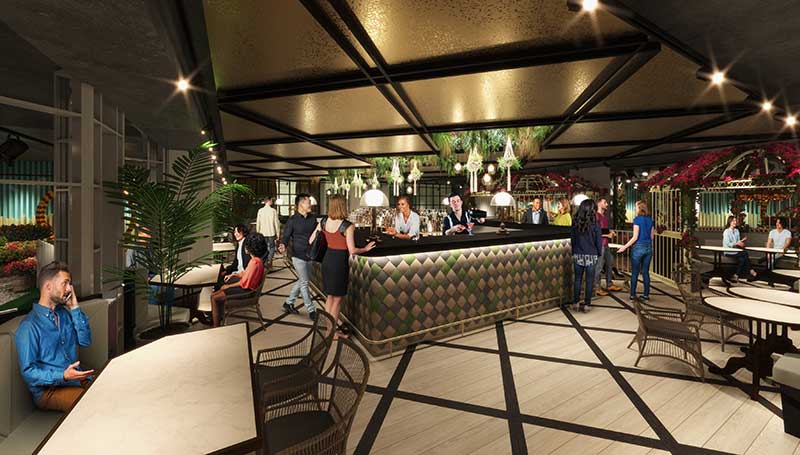 What: Swingers in the West End

In a nutshell: Street food and crazy golf on Oxford Street

Summing it all up: If you do like to be beside the seaside, head down to the newest Swingers, which will be opening up in the former BHS flagship building off Oxford Street to bring you cocktails, crazy golf, and loads of street food vendors, including one famously Instagrammable dessert seller.

If you’ve been wondering what’s happening with the giant, flagship BHS store on Oxford Street, then here’s your answer: street food, cocktails and crazy golf, courtesy of a new Swingers.

You may have already come across their first pop-up, Swingers in the City which brought ‘20s British golf club vibes to Bury Street with great success. For the West End version though, things will be more of a seaside holiday style affair designed to conjure up the English Riviera. You’ll even have to go through a hidden entrance in a seaside souvenir shop on John Prince’s street to find it.

Once safely inside, you’ll be able to wander around loads of themed stalls, from the Grand Hotel Bar, the Bandstand and the Promenade, which will be decked out with street food vendors and restaurants.

On the food front, there are four vendors. First up is Made Of Dough who will be running a Slice Bar serving ‘pizza in teglia’ - Roman style - with dough made from just flour, water, sea salt and extra virgin olive oil. It’s crunchy on the base, light and springy on top.

They're joined by Patty&Bun who'll be serving up Ari Golds and Colin Montgomerys (created exclusively for Swingers). And there will also be tacos from the taco masters Breddos. If all that putting has you working up a sweat, cool down with something from the ice-cream bar by Hackney Gelato. This will be their first concession and will offer a menu of gelatos, sundaes and alcoholic shakes.

How do I book: Book online at www.swingersldn.com from 14 November 2017