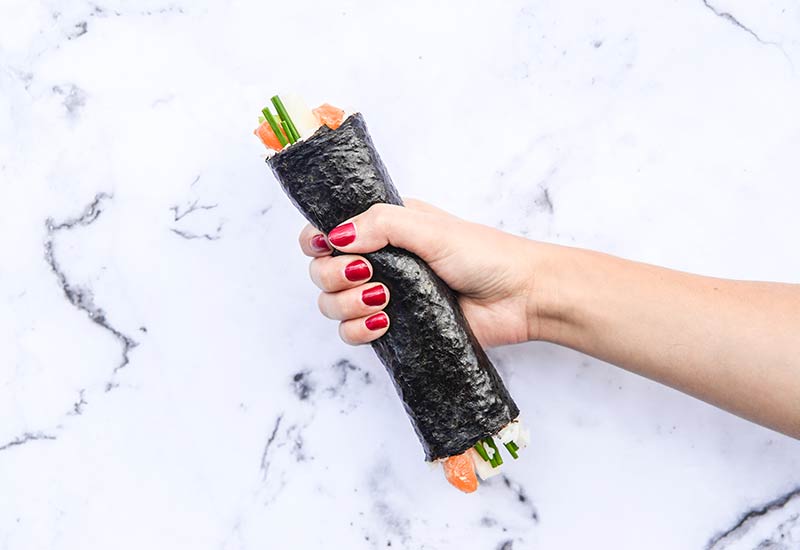 Summing it all up: If you're wondering why Inigo's hand rolls are different, picture something shaped more like a sushi burrito and you wouldn't be far off. They'll also be using Japanese-style ingredients not oft seen in a traditional sushi, like wasabi peas, macadamia nuts and broccoli.

What do you do when you want all the fresh, salty goodness of sushi, but don't quite have the time for the whole sit-down-soy-sauce-chopsticks experience? Grab a sushi roll from Inigo, an Aussie-led kiosk arriving in Soho that'll be serving their own sandwich-style take on the traditional Japanese food. It's the brainchild of Australian entrepreneur Jeremy Bliss and Charlie Hall of Code Hospitality.

Rather than cone shapes, Inigo's sushi rolls are left tube-shaped (far easier to munch on as you stride through Soho) and instead of traditional fillings, have an array of Japanese-inspired ingredients, including crushed wasabi peas and ponzu tuna.

There'll be six for you to try, with rotating specials, on offer from their kiosk on Great Windmill Street. Those will include (from £4):

If you like, you can get yours blowtorched which will get the nori extra crispy, which is something we like the sound of. There'll be salads and soups to add on, plus soft and alcoholic drinks. Coffee and breakfast will also be served from 8am.

If you're of the ethically-minded variety, then it's also encouraging to know that Inigo will be shunning plastic wrapping in favour of compostable packaging (if you've ever eaten in a Wasabi, you'll know why this is very good to hear.)

While you're there, keep an ear out for the playlist - Luke Pritchard of The Kooks is a mate of Jeremy's, and also an investor in the business – he will curate the soundtrack at Inigo.

Where is it? Great Windmill Street, Soho, City of Westminster, London W1D