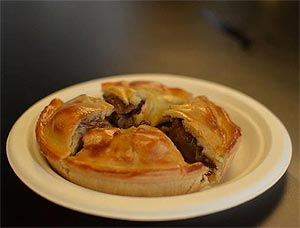 Living right by a football stadium undoubtedly has its drawbacks, but in the case of Arsenal's Emirates - there a few foodie compensations to be had to make up for the hordes of fans descending on your doorstep.

Here at Hot Dinners we've long been fans of Piebury Corner - a pie stand on Gillespie Road, which this year won the Football Pie league - a hugely competitive national competition for football pies.

It's run by local couple Paul and Nicky Campbell who have built up a loyal following of customers who come to the stall in their front garden for a Tony Adams (steak 'n' ale) or maybe a Thierry Henry (venison with red wine). Everything (bar the Scotch pies) are freshly made in their home for each match.

Such has been the stall's success that they're opening up a 'pie deli' on Holloway Road mid-November just opposite the junction with Liverpool Road. They've applied for a licence too.

Piebury Corner's been round since the summer of 2011 but this Autumn a new stall has turned up on Drayton Park to provide them with decent competition. Ji-Sun Shin is pastry chef at the newly-opened Apero at the Ampersand hotel in South Kensington and decided to open a stall when she saw her neighbours cooking up Jamaican food for passing fans. 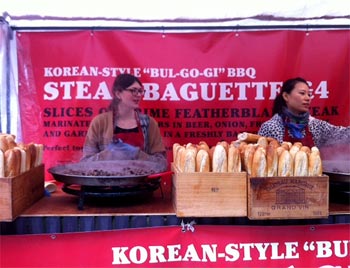 We were alerted to the existence of their stall by a piece by Nicholas Lander in the Financial Times, who talked about the bulgogi beef baguettes that Ji-Sun and her sister were cooking up on match days.

They sounded amazing, so we popped by today to try them. Made by slowly marinating feather-blade beef which is thinly sliced and then slowly cooked up in huge woks on the street, the bulgogi BBQ beef is then stuffed into baguettes and then topped with teryaki sauce and mayonnaise.

The beef is unbelievably tender and tasty and for £4.50 a throw - it's almost worth making it down to Arsenal on a match day, even if you're not watching the footie, to try either of these two cracking stalls out.