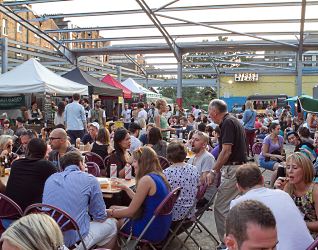 London night market Street Feast has ceased its nocturnal wanderings and found a permanent spot to trade from. They'll be opening up at Hackney Down Studios from Friday 21 September.

Roughly 16 traders will pitch up each week, from longstanding favourites like Big Apple Hot Dogs, Kimchi Cult and The Ribman, to newbies such as Vanduke noodles, and Yum Jungle. Launch night on the 21st will feature all of the above plus Ben Spalding's Stripped Back, The Wild Game Co (winners of the Young British Foodie street food award), Mama’s Jerk Station, Bhangra Burger and more.

There'll also be desserts courtesy of Sorbitium Ices and Sweet Tooth Factory along with the Street Feast Bar which will serve a range of drinks including craft beer from Camden Town Brewery and seasonal cocktails.

Having found a spot to set down roots, they'll also be running a few new events in addition to the usual trading, including live music sets and weekly cinema screenings (shown with headphones for sound). Street Feast will also welcome eight arts, crafts and fashion stalls and there will be a soft play area for kids.

If you think hip street food and bookings are strangers to one another, you might be pleasantly surprised to hear they've got an extended reservations service, with 100+ seats available for booking ranging from tables of two to groups as large as 20. There's also going to be a hidden private dining room known as The Chamber for groups of 8-12 who what want that extra bit of privacy which comes with an iPod-friendly sound system.

Street Feast will be at Hackney Downs Studios, 1 Downs Road, E5 8QJ from 5pm-12am, every Friday from 21st September. For more info and to see who'll be trading when follow them at @StreetFeastLDN