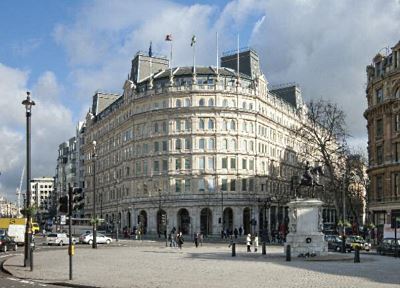 Central London looks set to get a swanky new restaurant in early summer. You may have spotted that the huge building on Trafalgar Square (the rather marvellously named 1-3 Grand Buildings) as you turn left out of Charing Cross has been under development for a while. In May it'll be the site of new opening Strand Dining Rooms.

The all day restaurant, focusing on traditional and contemporary British food, is being launched by Mark Harris who has previously worked at The Capital Hotel, Simon Parker Bowles’ Green’s Restaurant & Oyster Bar, and Searcy’s at The Gherkin.

Design will be by Russell Sage and will be based on the interior of a traditional railway Pullman Coach with all manner of polished wood finishes and beautiful detailing. They're promising a 'truly magical interior'.

Strand Dining Rooms will open in May at 1-3 Strand, Grand Buildings, London, WC2N. Follow them on Twitter @StrandDining