[SIGPLUS_EXCEPTION_SOURCE] Image source is expected to be a full URL or a path relative to the image base folder specified in the back-end but /blog/2012/ivy/gallery is neither a URL nor a relative path to an existing file or folder.
0
Shares

Stars wait tables at The Ivy for one night only 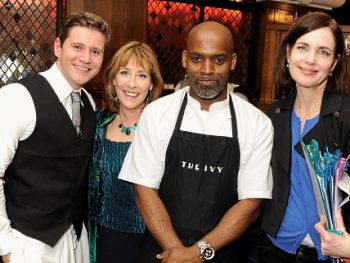 Diners at The Ivy are more used to eating alongside A-listers, but last night the tables were turned as faces from film and TV took over front of house at the London restaurant.

The stars were out to help for One Night Only at The Ivy - where actors shadowed the restaurant staff for the evening, sharing service duties, and proceeds from the evening were given to a collection of actors’ charities – The Combined Theatrical Charities.

The Ivy's Director, Fernando Peire, said of last night's shenanigans; “No-one could have differentiated between actors and Ivy staff...We thoroughly enjoyed having them and hope that they will consider coming back next year.”.

Afterward, everyone trooped upstairs to the Club at The Ivy for nightcaps, while restaurant critic Jay Rayner took to the piano and Downton's Jim Carter performed magic tricks.