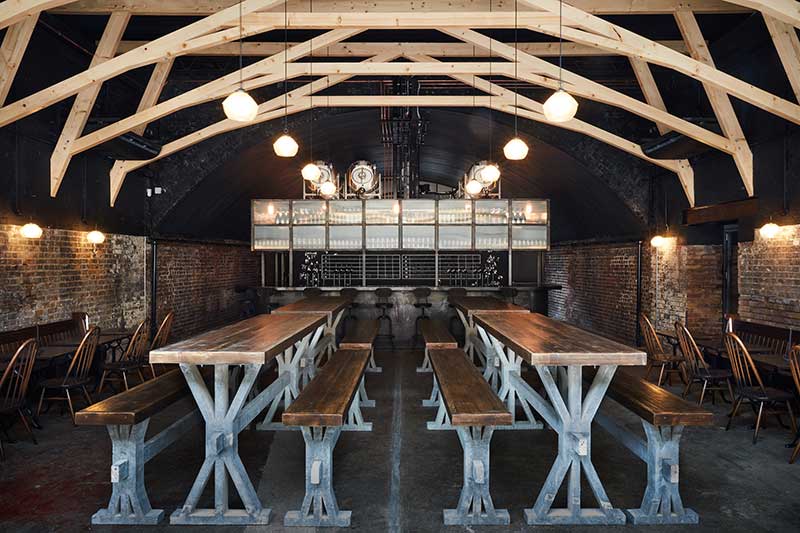 What: St John at Hackney Brewery

In a nutshell: Brewery and kitchen in Hackney Central Arches

Summing it all up: Hackney Central's railway arches are getting a bit of a revamp, adding a new space for food and drink in the area. And first on the scene will be St John at Hackney Brewery, who will be serving up their own beer and starting with a menu of Cypriot kebabs.

First things first - we should make this clear that this is not "St John" at Hackney Brewery - instead, the name of this new London brewery refers to the nearby "St John at Hackney" church (and music venue). It's one of the new places taking over the renovated railway arches in the area.

The focus will be on the beer, of course, with the new brewery run by Luke Scanlon, Brewer Ryan Robbins and their partners. The brewery itself takes over one arch, with the bar and kitchen taking over another. And given the influence in the brewery's name, we're told "a beautifully crafted wooden structure provides the framework for the ceiling, creating a church-like ambience." And on top of that, expect the odd church pew too.

It won't just be their own beer on show (which will be "very American in style but draw inspiration from other great styles from the UK, Belgium, and Germany") but they'll have beer (and wine) from around the world too.

As for the food, they'll have a rotating kitchen residency and kicking things off will be Ɛlα which will be serving Cypriot small plates and sharing dishes by Emilio Stavrou. He says it's inspired by “probably the best kebab shop in the world”, which he says is at the end of his grandma’s road in Nicosia, Cyprus. So you can expect a few great kebabs here (skewers or in pita), with meat including ethically sourced chicken thighs and pork neck as well as plenty of veggie options, while side include Orzo with anari and Cypriot cabbage salad.

When does it open? 16 June, open Tuesday - Sunday.