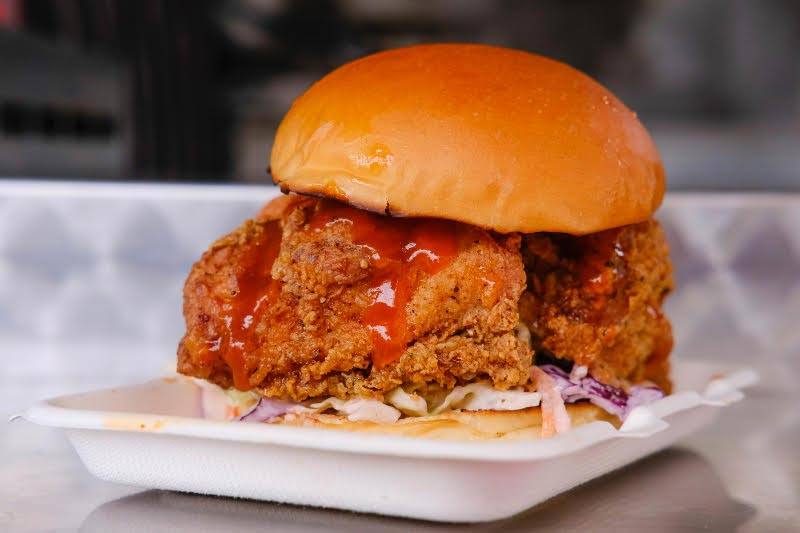 We've previously talked about the very welcome Zelman Drinks, from the people behind Zelman Meats and Goodman, that's set up shop right outside the entrance to Finsbury Park station. And now we've found out what they'll be serving with those drinks as chicken masters Spit and Roast are taking charge of the food.

The centerpiece of their menu will be their classic buttermilk fried chicken bap with slaw and their own Korean hot sauce - which they'll also be serving as sliders. Alongside that will be Korean hot wings.

And they'll have specials just for Zelman Drinks too.  They'll include the classic Dutch beer snack Bitterballen, served with traditional sweet mustard. They describe those as "piping hot beefy balls of savoury joy". And there's Pollo a la Brasa - Peruvian spit roast chicken marinaded in soy, cumin, lime and garlic, served up with smoked paprika fries and a tomatillo salsa from their friends Luardos.

They're also going to be making good use of Zelman's valve amp sound system and are hoping to host SpitRoastSoundSystem at the bar are also planning for a Spit&Roast Sunday Jam with Spit-Roast meats for those Sunday roast cravings.

Spit and Roast starts at Zelman Drinks on 16 November 2016 at 5 Station Pl, London N4 2DH. For more follow them on Twitter @zelmandrinks and @SpitandRoast.