[SIGPLUS_EXCEPTION_SOURCE] Image source is expected to be a full URL or a path relative to the image base folder specified in the back-end but /blog/2013/silentpicturehouse/gallery is neither a URL nor a relative path to an existing file or folder.
0
Shares 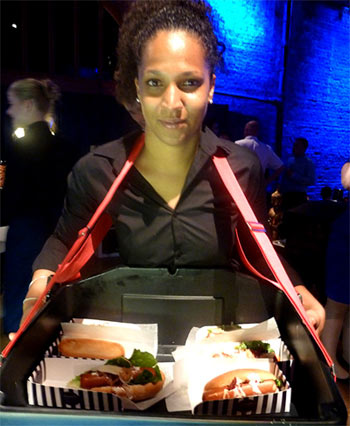 Hot Dinners likes to ease gently into the start of the working week, and so chose to escape the muggy weather on Monday night with cocktails and a movie at the red carpet launch of the British Airways Silent Picturehouse, a  five-screen cinema pop-up.

Taking place in the lofty arches of Vinopolis, just around the corner from Borough Market, guests and celebrities like Edith Bowman and Alex Zane were invited to cozy up with films to make you think of your summer holidays and enjoy film-flavoured food and drink. Choose from Skyfall, Jaws, Slumdog Millionaire, The Beach or Top Gun, and pick up a pair of wireless headphones to provide you with audio.

We started with Jaws-themed food and drink, lining our stomachs with the Sharkbite Caesar hotdog with crispy onions and dressing, before trying a sweet and strong Amity Island iced tea with Archers, vodka, and Curaçao.

We also sampled the five themed popcorns designed by Simon Hulstone, Michelin-starred chef of The Elephant. We couldn't get enough of the pungent (and aptly-named) Take My Breath away, a cheesy, spicy popcorn for Top Gun, while Simon's favourite was the Slumdog Millionaire flavour, a caramel curried popcorn. Tattinger Champagne provided the bubbles, while there was plenty of sweetshop pick-and-mix laid out for that authentic cinema feel.

During the daytime there are matinee screenings for children with Disney films, including Up and Alice in Wonderland, where hotdogs with glow-in-the-dark neon ketchup will take the spotlight, as well as plenty of sweet treats.

British Airways Silent Picturehouse is on until Friday at Vinopolis SE1. Tickets to grown up movies are now sold out but there are still tickets available for family screenings from £7.50. Find our more at the British Airways website.