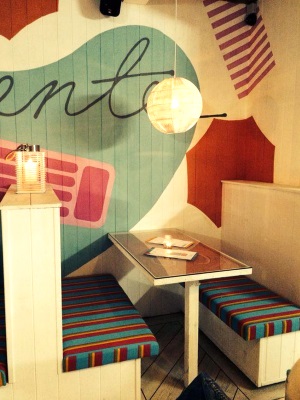 Londoners coming back from their summer vacation and wishing to extend that holiday feeling should head to South London where a new urban beach-themed restaurant, Spiaggia, is set to open this Autumn.

The Italian restaurant and bar in Fulham Broadway will feature sunloungers and vintage arcade games to set the scene. The menu also draws inspiration from the Med with piadinas - thin Italian flatbreads filled with Salami Napoli, Mozzarella and San Marzano tomatoes or Provolone cheese and roasted peppers with Borlotti bean and chilli mash. They'll also do dessert versions such as the Bella Donna, featuring Nutella, banana and Baileys.

As for the rest of the menu - think sharing dishes such as arancini, salmon carpaccio, seared tuna and pollo pops – crunchy chicken nuggets stuffed with cheese and also spiedini skewers from the robata grill.

Down in the basement bar or ‘lower deck’, there'll be daybeds to lounge on while you sip beach-themed cocktails and try to imagine you're not just off the Fulham Broadway, but on the Costa Smerelda instead.