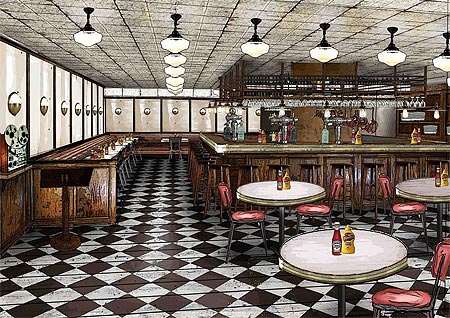 Following the great success of Electric Diner in Notting Hill (which we waddled out of a few months ago) Soho House's Nick Jones is now bringing burgers, shakes, cocktails and more to Soho in July.

Continuing his collaboration with Electric Diner's Brendan Sodikoff (who also owns Chicago's Au Cheval), the new Soho Diner will open on Old Compton Street in July, taking over the space of Boheme Kitchen and Bar. It'll have a similar dark wood/ American diner feel as well as a central bar with counter top dining.

The menu will be very familiar to anyone who's encountered the pleasingly artery-clogging food at Electric Diner as dishes will include the mammoth cheeseburger, honeyfried chicken and broiled salmon with lentil salad (if you really must have a lighter option). Alongside those will be a few new dishes like honey chicken drumsticks and quinoa, spinach and almond salad. There will be brunch on Saturdays and Sundays between 11am and 5pm with waffles and pancakes or lighter fare like poached eggs with avocado. For desserts, there will be brownies served and a selection of milkshakes..

In addition to this, and music to the ears of those of us who like cocktails but have very little patience, there will be cocktails on tap too. These include a Mojito, Root to Mule, Grey Goose Le Fizz, Old Fashioned and Cosmopolitan - all which will be freshly made on site each day and ready to pour instantly.

Soho Diner opens in Early July at 19-21 Old Compton Street, London W1D 5JJ and will be walk-ins only. The restaurant will open from 11am till late, closing at 3am from Thursday to Saturday. Follow them on twitter.