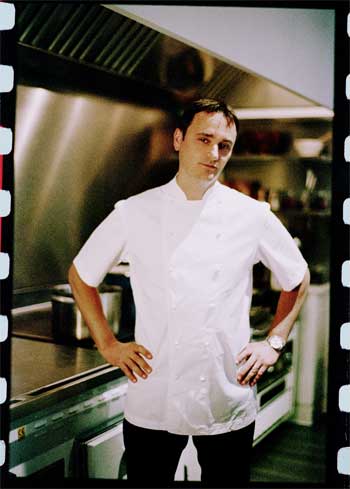 He's been opening restaurants as far away as Singapore and Shanghai but, as rumoured on our Coming Soon page for a few months now, Jason Atherton has finally confirmed that he's opening a second London restaurant.

We caught up with Jason this afternoon, just as he was sitting down at Pollen Street poring over plans with the architects for Social Eating House.

"It's not about expanding or trying to take over the world," Jason told us. "I've got my dream project here and when you get that it's very satisying. Paul's been with me six, seven years and he's ready to do his own thing. Now I either let Paul go off on his own - but I know there are a lot of sharks out there.

"So rather than me going and buying flats to invest in, I choose to invest in my guys which is what I've done with Paul. It's an investment for me as well as an exciting project for me to get involved in and help Paul realise his dream."

As for the menu, dishes might include ravioli of wild boar bolognaise, peppered hearts and kidney; Flamed cote de pork, beetroot, white polenta, spring onion and savory and CLT – crab, lettuce and tomato vinaigrette. On the dessert front, how about London honey sponge with goats curd ice cream and Lemon curd pies with peppered pastry crumble? Starters will be priced between £6-8 and mains will be around the £12-18 mark.

For the design, they have the brilliant Russell Sage Studios on board, who were responsible for the Zetter Townhouse and Gordon Ramsay's Bread St Kitchen. So expect exposed bricks and reclaimed furniture.

What's most interesting about the most recent details released about the Social Eating House is the idea of the 'Employees Only' dining room in the basement. That seats just 15 on a wraparound bar, which sounds very like the concept of James Knappett's Kitchen Table. There will also be a first floor bar, called The Blind Pig, run by mixologist Gareth Evans (bar manager at Pollen St Social) who's come up with an interesting list of cocktails including the lethal-sounding Thermonuclear daiquiri and Scrub a Dub Dub.

The Social Eating House will be opening at 58-59 Poland Street in April 2013.