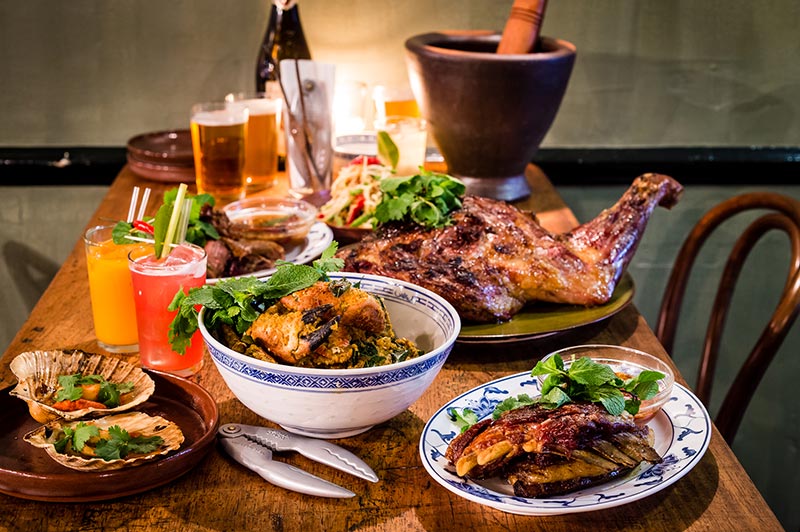 Tragic news for fans of the much-loved Smoking Goat. After three and a half years of churning out top Thai barbecue in Soho, the immensely popular restaurant will close on 14 January, bowing out to allow for Denmark Street's redevelopment.

The restaurant, which has been called by critics "fist-and-wrist-and-possibly-elbow-and-knee-licking good" and boasting sauces described as "otherworldly... worth dirtying your nails and wrecking your shirt for," opened on a shoestring in 2014, setting up in a former dive bar on the eclectic Denmark Street. Since then, the barbecue joint has moved from strength to strength, skyrocketing in popularity, eventually opening a second Smoking Goat in Shoreditch, as well as Kiln on nearby Brewer Street.

"We’ve had an unforgettable three years on Denmark Street," said co-founder Ben Chapman. "Denmark Street is undergoing some exciting changes and the developers have been hugely supportive to allow us to continue service amongst it all, but it’s now time to leave them to crack on" added co-founder Brian Hannon. (Denmark Street is in the midst of a serious regeneration as a result of Crossrail.)

Determined to go out with a bang rather than a whimper, the team - led by GM Kylie Kerslake, Tom Muza in the kitchen and the Goat’s heart and soul Stuart Smith - will throw a series of 'Last Days of the Goat Dinners' running from 11-13 January at both lunch and dinner, celebrating the restaurant's successes. Some of the dishes we've been told to expect include

It's safe to assume that these final seatings will be tremendously popular, so do move quickly if you'd like to take part. However, if you can't make it down, not all is lost. You'll still be able to head east to Smoking Goat Shoreditch where head chef Ali Borer is still busy in the kitchen, or stroll 10 minutes to Brewer Street to Kiln.