Smoking Goat is coming to Shoreditch - Ben Chapman tells all... 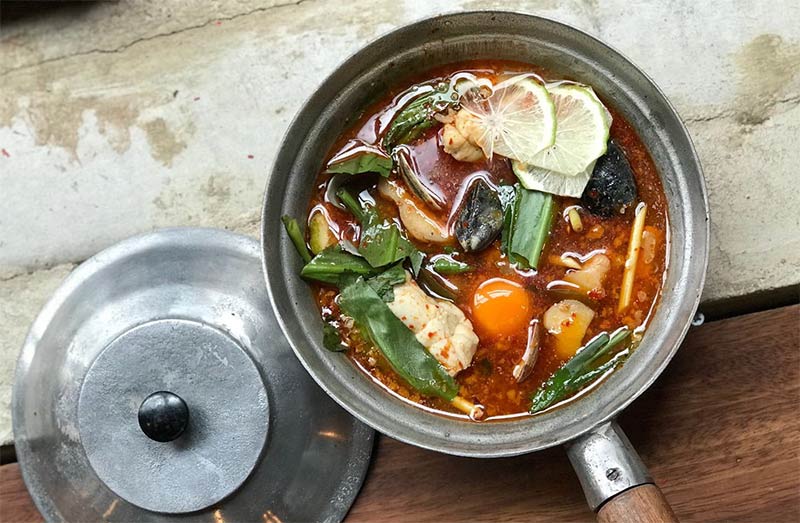 One of Soho's most popular and successful restaurants, The Smoking Goat, is coming to Shoreditch. They're taking over a big place that - ahem - used to be a "strip-pub" (yes exactly what it sounds like) so expect a much bigger Smoking Goat than before.

We know you guys love The Smoking Goat, so we needed to find out more on your behalf. So we caught up with Smoking Goat's Ben Chapman to do just that...

What can we expect from the new Smoking Goat?

Firstly, Ali Borer will move from Denmark Street to Redchurch Street to head the kitchen and become co-owner alongside Brian and I.

Ali and I spent some time in Bangkok together recently (photo above) and hatched some plans for a no-hassle, late night place where the ingredients are really good. Where it’s as much about drinking and hanging out as eating.

We’ve always loved the open air canteen like restaurants you get across Thailand. They're usually a sea of plastic chairs, open really late and the place might be famous for a couple of dishes that they specialise in. Once we’d heard about the White Horse (a big ex-strip pub on Redchurch street) it started to click and felt right for next step for Smoking Goat.

Tell us about the menu.

We’re working on a really short barbecue and seafood menu, which allows us to flex dishes around our producers and keep the quality of ingredients really high, which is something we’ve collectively worked hard on over the last few years.

The other thing is we want the food to be really good value, as suits that late-night canteen-style atmosphere. So, a dish like tom yam nam sai, is something we hope we can serve really well now. We have the equivalent of 2 acres really fragrant lemongrass being grown by Sean O'Neil in Cornwall under tunnels. We have really good relationships with fishermen so can use underrated native things like spider crab, mylor prawns, velvet crab, wild mussels etc.

Crucially the vegetables, which we do bring in through our importer Tana, we’re really happy with, such as perfect bright little mouse-shit chillies for nam sai (the ancient clear, spicy, heady, serious version of tom yam which I've become a bit obsessed with recently). Hopefully, by working this way around - where the produce writes the menu - we can serve some really good-value food with no comprise on ingredients and ideas.

And what about the barbecue side of things?

We’ve been playing with a Thai variant of char siu, roasted in huge custom charcoal and wood burning pots. We have an in-house butcher, Roberto at Kiln, who breaks all the Tamworth pigs raised for us by Fred Price (who is a really progressive farmer with a lovely set up in Somerset), Roberto will move across to Redchurch street with a good butchery set up so we can supply all three restaurants along the same quality and value.

Ali is interested in some of the more Chinatown influenced steamed rolled noodle dishes, so there will be things like pigs head and oyster rice rolls and maybe a few of his Offal Monday favourites like northern style duck laap. We’re sourcing really fragrant new season jasmine rice as much as possible, which I’m excited about.

What can you tell us about the new Shoreditch space?

It’s bigger, seating around 100. The building has a really specific atmosphere. On the one hand you have the scale and heft of the concrete Tea Building and on the other the furtive detail of a family run East End strip pub.

We like to do as little designing as possible and to make the functional elements simple, well-made and beautiful. So there will be an open kitchen and bar with some counter seating through the centre of the building and canteen-like large tables elsewhere. It has the most wonderful golden evening time light through huge 30’s factory scale windows on two sides, so it has been pretty easy to let the building lead the design. Plus we’re in the safe hands of long time collaborators Dan Preston and Colin Harding.

Will you be able to book?

You'll be able to book the larger tables hidden towards the back of the building, beyond the kitchen. Those will have a similar feel to the private room at the Soho Smoking Goat.

And how about the drinks?

For wines, we're thinking of 3 or 4 white and 3 or 4 red on a daily changing list all by the glass. Zeren (Wilson, aka Bitten & Written, who worked on the wine list at the original Smoking Goat and Kiln) is focussing on underrated regions that offer good value, not unlike our approach to seafood and butchery.

So instead of having a house wine which no one is particularly excited about, let's make them all engaging, expressive and good value.

We'll also have a good range of beers, orientated towards fresher, easy drinking pale ales. I really like what the guys at Wild Brew Co in Somerset are doing at the moment so hope to serve quite a bit of their stuff.

Where is it? 64 Shoreditch High Street London E1 6JJ