Shrimpy's latest London spot to open its doors for brunch 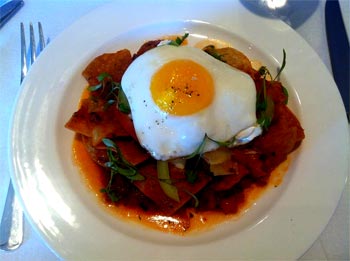 There's a distinct theme emerging in London's restaurants this Autumn which no-one seems to have noticed. It has nothing to do with having a one dish theme like chicken or steak - nope, it's all about starting the day right.

The first place to embrace the joys of early eating was Quo Vadis which launched its breakfast offering (along with bakery goods sold in the entrance) at the beginning of October.

Then we heard that Langan's in Mayfair would be opening its doors for early (and also incredibly late night) breakfasts from this month.

Now squeezing in between both of those is hip King's Cross hangout Shrimpy's which has just started serving brunch every day from 11 until 4pm. Dishes on their brunch menu range from fried eggs with morcilla and coriander for £5.50 to tortilla de patata with fried green tomatoes and salsa for £6.50 or chilaquiles for £7 (yes we had to look that up - it's apparently a traditional Mexican breakfast way to use up stale tortilla - you often fry up the tortilla strips with scrambled eggs, salsa and chilli).

As you'd expect from Shrimpy's there are also two special brunch drinks to go with the menu - the usual Bloody Mary for £7.50 or a Ruby Breakfast fizz which includes cava, Campari, pink grapefruit and orange juice (£9).

Find out more about Shrimpy's.