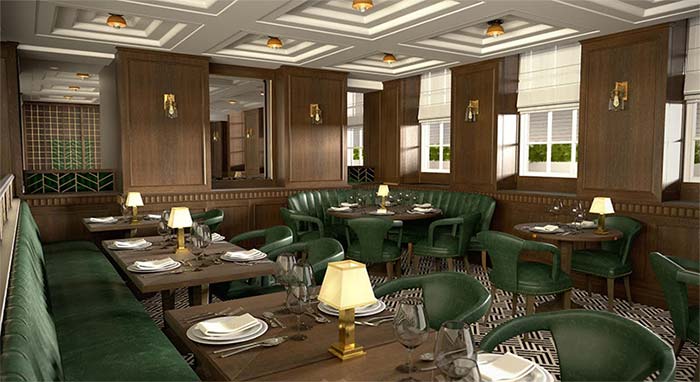 Michelin-starred chef Shaun Rankin has unveiled plans to open a restaurant at the Flemings Mayfair hotel. The new restaurant is part of a £14 million refurbishment at the hotel which has been privately owned by the same family for over 40 years. Maybe they've been looking across town at the similarly privately-owned Goring and thinking they'd like a piece of that action.

Rankin's restaurant (who will continue to run Ormer in Jersey) will focus on the chef's Jersey heritage, the restaurant will offer a modern British menu. The dining room will have room for 80 diners while there'll be a substantial 40 seat bar too, along with a Chef’s Table and two private dining rooms. You can take a look at the designs of the restaurant above.

Overseeing the plans is new General Manager, Henrik Muehle and he's got loads of experience when it comes to working in posh hotels with big chefs. Not only did he help launch St. James’s Hotel & Club Mayfair with Michelin‐starred chef William Drabble, he also worked at The Capital Hotel with Eric Chavot.

Shaun Rankin's Ormer opens 23 August with a soft launch until 19 Sept at Flemings Mayfair, 7‐12 Half Moon Street Mayfair London W1J 7BH. Keep up with their news on Twitter @flemingsmayfair