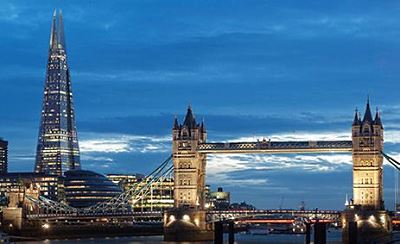 We've already heard what independent restaurants have planned for the Shard (with Oblix, Aqua London and Hutong all confirmed), and now the Shangri-La hotel group has revealed what dining options it has planned for the higher floors.

Shangri-La London will take over 18 floors of the Shard - from floor 34 to 52 - with an estimated opening date of May 2014. They'll have four places to eat - a gourmet deli on the ground floor, a destination restaurant and lounge on level 35, and a signature bar on level 52.

Lang is the hotel cake shop and artisan deli on the ground floor, will feature a selection of Shangri-La' cakes, home-made chocolates and pastries (such as Chocolate Temptation – "a rich chocolate sponge, red fruit tea-infused Ghanaian chocolate ganache, raspberry compote, topped with a soft chocolate cream") and an afternoon tea service. They'll also have freshly prepared seasonal hampers, classic savouries and sandwiches for eat-in or take-away.

Ting (named after the Chinese word for living room) is the restaurant on level 35 will be their destination restaurant, open for all day-dining and will apparently serve up a modern European menu. Ting's lounge on the other hand will serve dishes including curry laksa, “Hainan” chicken rice and char koay teow and will also offer two afternoon teas - a trad British one as well as an Asian-inspired Shangri-La tea featuring one of the largest selections of Chinese teas in London.

And finally we come to what'll be the hardest bar to get into in London within nanoseconds of it opening. Gong, will apparently "take one on an aspirational journey infused with modern Asian sensuality". The place will strongly feature Cinnabar - a mineral used historically to create the "dragon red" used in the walls of the Chinese Imperial Palaces. The bar will have three distinct 'chambers' - a cocktail bar, champagne bar and the swimming pool. Presumably that latter bit overlooks the infinity pool which is also on the 52nd floor. Most importantly, it'll be the highest bar in The Shard, and by definition, London's highest cocktail bar.