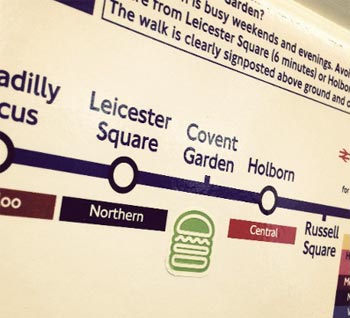 It had been rumoured for a while that Danny Meyer was bringing New York's most famous burger institution to London - that time is almost upon us. Shake Shack will be arriving in Covent Garden in the Market Building mid 2013, taking over a large space there - similar to the set up that Jamie Oliver has with Union Jacks. Yes, that's the Market Building just across from MEATMarket (which clearly has the Shack among its influences). It's also very close to US burger chain Five Guys which is opening around the same time. So we may have to prepare for a burger war this summer.

For those who aren't aware of the Shack, its flagship is in Madison Square Park in New York (with more around dotted around the US) and a visit is pretty much mandatory for any burger fans visiting New York. And if you're not a fan of the queues at Meat Liquor - just try queueing at that Shake Shack in August - you'll have really earned your burger by the end.

"For years an enormous number of friends in London have asked us when we would bring our first restaurant to their home,” said Danny Meyer. “We’ve looked high and wide for just the right time and spot, and at last we’ve found it. We’re positively in love with London’s thriving food culture, and are humbled and excited to bring Shake Shack to the UK.”

In our recent interview with Danny Meyer, we confirmed some more details about the menu. So while the basic burgers (from £5 single/£7 double), hot dogs (from £4) and shakes (£4.50) will remain the same as the ones you love from NYC, there are some changes specific to London which sees Shake Shack teaming up with some big London names. There is a London-only Cumberland Sausage handmade by Sillfield Farm using rare breed pork from Cumbria as well as the ShackMeister Sausage (£4.25) - Cumberland pork sausage topped with cheese sauce and crispy ShackMeister Ale-marinated shallots.

Meanwhile, the bacon for the SmokeShack (a ShackBurger with cherry pepper relish and bacon - £6.50 single/£9.50 double) will come from Jimmy Butler (from The Blythburgh Pig Farm on the Suffolk coast) as well other select British Free range Wiltshire farms. And they'll be shipping in their frankly amazing potato buns.

Drinks-wise, there will be Shackmeister Ale from Brooklyn Brewery as well as local beers in the shape of Kernel, Thornbridge and Meantime London lager alongside the house wine from Napa Valley made by Frog’s Leap vineyard (£4.50 a glass/£17 a bottle). For loads more details, read the full interview.

Now if we can just have a permanent In n' Out, there will be no need to ever go to the States for a burger again.

Shake Shack London will open in the Covent Garden Market Building on July 5. Keep up to speed with what they're up to by following them @shakeshackuk on Twitter.