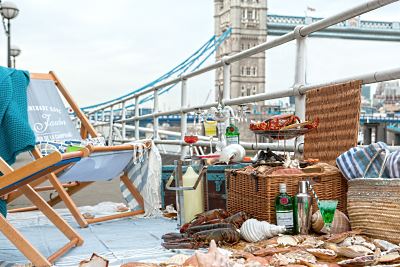 As London creeps towards a more summer clime, two parts of the city are gearing up to greet it beach-style.

Down by Tower Bridge, the Pont de le Tour have redone their outside space, launching it as a 1920s seaside-inspired terrace, complete with crustacean and ceviche bar named Pont Plage.

Officially launching on Tuesday 3rd June, head chef Tom Cook’s summer specials will include crab and crevette buckets, ceviche and sashimi-style fresh fish. There'll also be chilled Chateau Minuty rosé wine by the glass from the Pont Plage ‘Rosé Fontaine’ a 6L Imperial bottle served via a specialist Wikeeps system that preserves the aromas and quality of the wine via an injection of neutral gas.

Meanwhile over in Covent Garden, the Brasilian barbecue restaurant Cabana will launch a pop up Grill from Ipanema, a Brasilian beach grill complete with golden sand from Brasil’s shores during the World Cup from 28 June to 13 July.

On offer will be a selection of new Cabana dishes, including flame grilled skewers, chicken coxinhas and cassava chips washed down with caipirinhas and batidas.