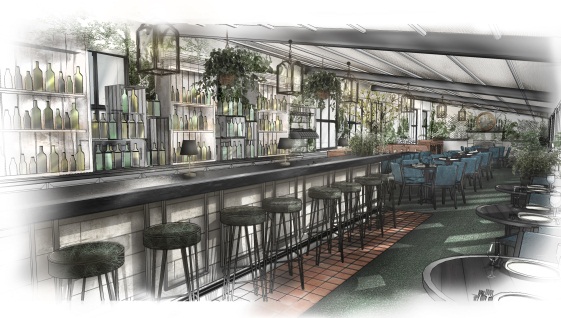 Well the London rooftop scene just got a LOT more interesting. We can exclusively reveal that from this summer, Selfridges will run a series of annual residencies on its rooftop. Up on the roof with... will kick off with Q Grill - which opened in Camden this Spring by Des McDonald (who's also responsible for Islington's Fish and Chip Shop and the Holborn Dining Rooms).

What you need to know about On the Roof at Selfridges

It's in a brand new space on Selfridges rooftop -  Inspired by grand Victorian greenhouses, the space will be an outdoors one but (handily given the British weather) one that's protected with a retractable roof. You get up there via a dedicated lift on the ground floor which you may know of if you went to Pierre Koffmann's rooftop pop-up there or the Bompas and Parr lake. There's room for 100 in the space which includes a restaurant, bar and counter dining area.

Open all day - a late breakfast on the roof sounds like a rather lovely way to start the day. How about organic granola with yoghurt and Early Grey prunes or buttermilk pancakes with blueberry compote and poached egg, with beans and kale? They'll also serve an afternoon tea with classic, sugar free, or gluten free versions..

It won't be a complete meatfest - Yes there'll be BBQ with plenty of meat dishes cooked over a charcoal grill. But, mindful that this is a summer restaurant the menu will also include fresh seafood, super-food salads, and desserts such as Eton Mess or English strawberries and cream..

Evening will see the roof transformed - imagine walking up a 'garden path' into a candlelit terraced dining area. The bar will feature a selection of wines, summery cocktails, jugs of Pimms and award-winning English sparkling wine from the Gusbourne Estate.

If you're looking for something more healthy - the space will also feature a pop-up juice bar, operated by the successful New York health brand The Juicery, founded by Cindy Palusamy.

The space will also be a foodie hub - expect a full programme of talks and events from some of the worlds leading chefs, producers, innovators and influencers.

Where is it? Selfridges 400 Oxford Street W1A 1AB