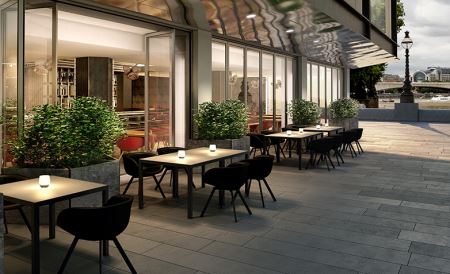 The restaurant and bar at the new Mondrian Hotel in the iconic Sea Containers building on the South Bank both promise to be among the biggest openings of Autumn. We reported on the announcement earlier this year and now more details about Seamus Mullen's restaurant, which is to be called Sea Containers, have been released.

Working with Executive chef Luke Rayment, they're really pushing the "farm to table" sustainable nature of the restaurant with food sourced from organic farmers and Fair Trade cooperatives from around the UK and the Continent.

The menu will be split into Small Plates, Raw, Vegetables, Large Plates, Family Style and include:

As for private dining rooms - there are two of them and the one by the kitchen with its own private terrace sounds like the one to grab.

And then there are the drinks, created by the man behind the award-winning White Lyan, Ryan Chetiyawardana. As well as his own bar in the hotel, he's creating cocktails to match the Sea Containers menu including:

Over at Lyan's main bar in the hotel, Dandelyan, they'll "use carefully sourced fruits, vegetables, and fresh herbs combined with modern tools and proprietary techniques to elevate classic drinks and re-imagine flavour combinations." In practice that means drinks like the following:

On top of that, Dandelyan will have its own food menu, which has been created by the Sea Containers gang. That features

Hot Dinners caught up with Seamus Mullen where we pumped him for more information on Sea Containers.

What made you want to open in London now?

I’m a New Yorker through and through and there are very few cities in the world that compare to the energy and vibrancy of New York and London is certainly one of them. I'm completely enamored with London, there are so many things about the city that I love.

What do you think of the current London dining scene when compared with New York?

It’s a tremendous dining city, with so many options. The food in London is flourishing right now and I’m extremely excited to be a part of it.

What can you tell us about the kind of food and experience to expect at Sea Containers?

Convivial, welcoming, fun, unpretentious, celebratory. I really want the experience to be about sharing and enjoying good company. At Sea Containers my cooking will be informed by the Mediterranean and 'New American' cuisines with the best ingredients of Britain.

And finally - when eating out in London, where are your first go-to places?

So many places! I’m a huge fan of Japanese food and I love Koya and Koya Bar and I’m a big fan of Nopi.

Dandelyan and Sea Containers open at the Mondrian London 20 Upper Ground, London SE1 9PD on 30th September. They'll open for breakfast, lunch and dinner every day and brunch will be served at the weekends. For more information, follow them on Twitter @MondrianLDN.

Booking lines are now open for Sea Containers on 020 3747 1000. Lines will be open from 9am - 7pm daily until opening when lines will be manned 24hrs. Online reservations via OpenTable will open on 30 September.